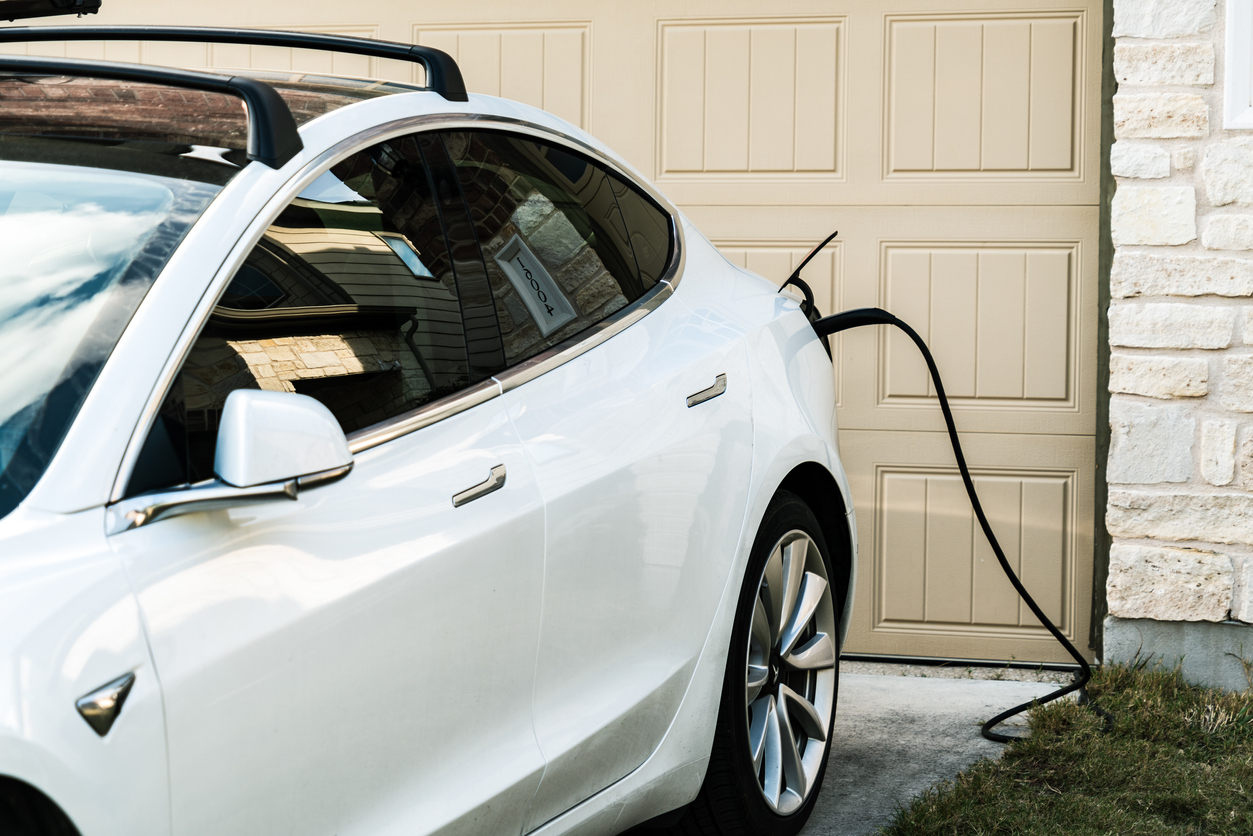 What do you need to know about buying and installing a Level 2 home charger? Read what real EV drivers wish they knew before they did.

On the second-to-last day of 2018, our family brought home a new Tesla Model 3, a purchase that initially strained our budget but has since repaid us by way of the car’s fantastically low operating and maintenance costs.

The relatively modest price of electricity has been the main offset to the purchase price of the Model 3. And while getting electric current into the car is a straightforward process - literally plug and play - figuring out the best way to charge requires a bit of market awareness and some prep work. It’s not rocket science, though: 80% of EV owners have it completely figured out and charge their cars at home, according to the U.S. Department of Energy.

So, when an EV was still just a twinkle in our eyes, we did a little homework and then fortified our carport with a 240-volt circuit that included a stout 50-amp breaker and a couple of NEMA 14-50 wall sockets – the kind that match up with the plug on many EVs, recreational vehicles and wall chargers. The setup cost about $500 total and insured that speedy Level 2 charging would be ready to go when our EV arrived. It worked out well (more on that later).

We asked Recurrent’s community of EV drivers what they wish they had known about driving electric before they made the switch. There were a few big trends, but by far the loudest cry was that they wished they had known more about choosing and installing a home Level 2 charger.

This New York Times Wirecutter guide might have saved them some trouble, and it might help you, as well, along with our teammates’ lessons-learned stories below. But first, if you’re new to the EV universe you’ll want to become familiar with the following terminology:

Level 1 – EV charging that operates on standard 110/120-volt household current and adds around three to six miles of range every hour. With Level 1, you plug your car into an ordinary wall socket.

Level 2 – EV charging that operates on 220/240-volt current and adds a snappy 25 to 50 miles of range every hour. It’s typically an add-on to a home’s standard 110/120-volt system, and often incorporates a home charging station installed in a garage or carport.

Level 3 – EV charging that operates at up to 800 volts and 350 amps, and is capable of adding a blazing 20 miles of range per minute to cars equipped to manage such high electrical loads. Also known as DC fast charging, Level 3 is mostly found along major roadways, is used primarily for long trips and is not available for home installation.

Breaker – A safety device (circuit breaker) designed to protect an electrical circuit from damage caused by too much current or a short circuit. Level 2 EV charging requires a robust breaker, often in the 50-amp range. More amperage enables quicker charging.

Variables come into play when considering a home EV-charging system and it pays to consider your needs and preferences:

Here is how the process went for several real life EV drivers:

Recurrent team member Blake took advantage of a generous rebate from his electric-service provider to arrive at a wallet-friendly net cost for his charging setup. Blake paid $419 for a portable Grizzl-E Classic home charging station and $500 for an electrician’s installation work, which included new wiring to accommodate the charger. His utility rebated him $500, bringing the project’s final cost to only $419. His consideration was that without a garage, he needed a weatherproof charger. He also wanted portability, which “is why I installed an RV-outlet instead of hard-wiring the charger into my house. It’s really easy to either take my charger with me anywhere, or to swap to a different charger in the future without any electrical work.”

“I had my charger installed about a year and half after getting my EV,” Blake continued, “Before getting the charger, we used the 110-volt Level 1 charger, and that actually worked out OK because I have a small-capacity older [Nissan] Leaf, so I could get a full charge in overnight. I also made frequent use of free public Level 2 chargers whenever I went to town.”

Takeaway: not everyone needs a Level 2 charger right away. It will depend on how much range you need and the availability of public charging. Level 1 charging is more feasible with small batteries and plug-in hybrids.

Consumer Reports suggests that before you invest in a 240-volt Level 2 charger, first try out the 110/120-volt Level 1 cord that’s included with virtually every EV. That type of connector, which plugs into a standard three-prong wall outlet, can work well with plug-in hybrids or EVs with smaller batteries, like Blake’s Leaf.

But the fill rate with a Level 1 cable is slow – you’ll add 3 to 6 miles every hour versus 25 to 50 miles in the same period for a Level 2 system – and may not be practical for long-range vehicles with big batteries, as one of Recurrent’s 10,000 EV drivers cautions.

“Definitely plan to have or install a home charger before bringing the EV home,” one such driver said. “You do NOT want to rely on the 120-volt charging cord provided by the car manufacturer…or finding the nearest charging station”

Springing for a Level 2 charger makes even more sense if you own more than one EV.

“During the time when we had two EVs, having something that charged the car fast allowed us to rotate two cars quite easily without the need for a second charger,” said Recurrent team member Andrew. “Any time we absolutely needed to charge both cars at once, one could be plugged into a 120V outlet.”

While Blake only spent around $419 out of pocket for his Level 2 charger, other Recurrent team members rushed to have the home charger installed before they got their vehicle, and paid a hefty price.

“I went out of my way – meaning paying an electrician a lot extra to rush it – to get my first Level 2 charger installed prior to the arrival of the car,” said Scott, also of Recurrent, who wound up paying $2500 for the installation. ”In retrospect, I could have just plugged [my EV] into an extension cord and taken my time with the install of Level 2.”

Takeaway: Try price-shopping electricians – you may be surprised at how far apart some estimates can be – and default to the ones who have EV-charger installation experience.

Some of Scott’s special considerations included extra electric work to accommodate a 30 amp circuit. He needed an electrician to install a “new thicker copper wire to the garage to carry all that electricity…Also, the charger needed all the power on that circuit, so we needed to add another circuit to the garage for lights and the garage door, etc.”

Scott paid a total of $3,300 for his system, which is on the top end of the spectrum for charger installation. Part of this is that he paid $800 for an Electrify Home Level 2 “smart” charger.

Smart chargers share a data connection with the EV and are able automatically to take advantage of cheap, off-peak electricity rates, assuming your utility or energy contract offers such an arrangement. “In [hindsight], since my utility does not charge time-of-use rates, there was no point in getting a smart charger,” Scott said. Other Recurrent drivers, however, love the savings and control that smart chargers can offer: “It's worth it to plug in the car and schedule it to charge overnight while you're asleep, and at non-peak hours!”

So how does Scott feel about the whole process? “It’s great to have the Level 2 for charging speed, but I probably spent two times overall what I should have because I didn’t know what I was doing,” Scott said.

‍The takeaway here: look at your electric bill before you decide on a smart charger. Bargain charging in the wee hours, also known as time-of-use electricity rates, depends on the electric-service plans available to you.

While Scott’s installation included a lot of extra electric work, most members of the Recurrent team report total installation times of less than one day, and often just a few hours. Recurrent’s Pradeep already had a 240-volt outlet in his garage, so his system install took only about 30 minutes, plus, the charger itself was “free with my Nissan Leaf lease. Nissan shipped it in about a week.” In Pradeep’s case, a Level 2 charger was indispensable for being able to use his first-generation Nissan Leaf, “since my Leaf was giving, like, 80 to 90 miles per charge and I was using about 95% [of that] every day and had to recharge by morning.”

Unlike many EV owners, my family never installed a dedicated home charging station. The “mobile connector” cable that came with our Model 3 plugs directly into our carport’s 240-volt wall outlet and adds about 30 miles of range each hour – plenty quick for a full overnight charge – and we can bring it along when we travel. (Tesla no longer includes that connector with its new cars. If you want one, you must buy it separately for $200.) The Tesla Wall Connector charges faster and has features that the mobile connector lacks, but we haven’t missed the extra speed or gizmos, and we avoided the wall unit’s $550 price tag.

“What did I wish I had known five years ago when I got my EV?” a seasoned EV driver pondered. “The initial expense in installing a home charger. But it has been so worth it in the long run.”

Written by John Kent, an independent journalist specializing in transportation and environmental issues. He served as a staff writer for the Albuquerque Journal and has contributed stories to the Associated Press, Dallas Morning News and Fort Worth Star-Telegram. He is a contributing editor for Texas Climate News and a frequent contributor to GreenSource DFW.