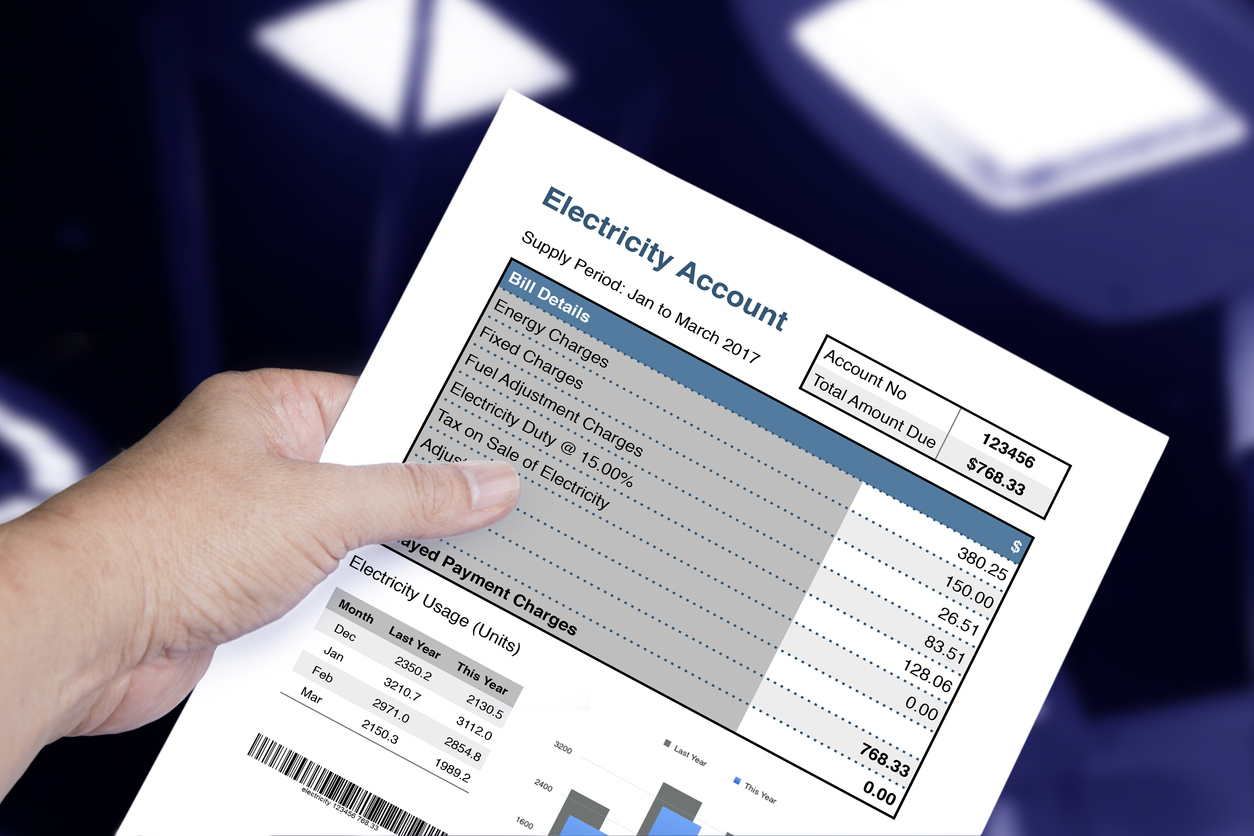 Understanding Your Electric Bill Can Help You Save on Home Charging

Lately, EVs have been an attractive option for car buyers, especially due to the volatility of gas prices and new incentives. EV drivers can expect to save money charging, rather than fueling up. However, instead of a receipt at the pump every week or so, EV owners who charge at home will start to see a lump sum on their utility bill, leading some to ask, “Can I make this cheaper?” The answer is: most likely yes! However, the strategy may be different for one person than another. In this article we will discuss how to solve this optimization problem and what factors are at play.

The first place to start is understanding your utility bill and how you are charged for electricity. The Department of Energy FEMP summarizes the different utility bill components very well in the chart below. The main components are: energy charges, demand charges, and fixed charges. We will discuss the energy and demand charges in more depth, including what steps you can take to reduce them. The fixed charges, however, are for general utility services and operations, which are not in the customer’s control.

BILL COMPONENT
HOW IT IS BILLED
HOW TO LOWER THIS CHARGE

First, you are charged for the amount of energy or electricity that you are consuming, measured in kilowatt-hours, kWh. For an EV specifically, this component is similar to paying for the amount of gas you put in your car, but instead it is the amount of energy used to charge the battery. In a previous article, we explained some of the most common energy bill rate plans including: flat rates, tiered rates, and time of use rates.

For a flat rate system, the customer is charged the same price per kWh, unconditionally. This means there is little room for cost savings in terms of energy usage. It also means that fancy upgrades such as a smart charger or smart electric panel aren’t as necessary, even though they may help you save on demand charges.

If a utility uses tiered rates, this means they will change the price per kWh if you use more than a certain amount of energy. For example, Seattle City Light increases the rate about 2.5 cents/kWh after the customer uses 10 kWh a day during the summer or 16 kWh a day during the winter. The rate table below from ConEd shows that in the summer, the price of electricity per kWh increases after using 250 kWh.

This is not always the best plan for EV drivers, since home charging can bump their usage up to the higher tier. Drivers with these sorts of plans often rely on public charging, since public kWh prices are often cheaper than hitting the second price tier at home.

Alternatively, with time of use rates, the price of electricity is related to how high the demand is. When a lot of people use energy, usually between 4pm and 9pm, the price per kWh is higher. There is generally an “off-peak,” or least expensive rate, and sometimes a “mid-peak” rate priced in between the two. A time of use plan can be a great option for many EV drivers, since it is pretty simple to switch when you charge to an off-peak time.

For example, below we are showing a time of use rate example from PG&E, one of the leading utilities in California. Below the charging schedule is the energy demand for the state of California throughout the day. As you can see, the high peak prices correspond to the peak load demand. A smart charger or meter can work with your utility to shift charge time to the off-peak hours.

Many utility companies offer suggestions to reduce the cost of EV charging. For instance, ConEd suggests setting up a second meter for your EV charger and setting it up for a time of use plan. This can be done even for apartment dwellers, making it easy for the building to pass through the costs of EV charging. However, the cost to set up a new meter tends to fall on the EV driver.

Demand charges are determined by the highest rate of power usage. This can be evaluated on different time frames - it can be as short as a day to as long as a billing cycle, depending on utility. It’s important to keep in mind that your demand charge is not the total amount of energy you consume (kWh), but instead the rate at which you use it (kW). So, the more power you use at one time, the higher the demand charge. If you run all your appliances at the same time, it increases the rate of usage, and thus, your demand charge. Adding EV charging to an already  high usage rate would increase the demand charge even more.

To address load demand charges for EV charging, let’s identify what type of charger you are using first. For at-home charging, you would use either a Level 1 or Level 2 charger.

Level 1 chargers typically come with the vehicle and can be plugged into the standard grounded 120 V outlet in American homes. Level 1 will charge the vehicle very slowly, at a rate of up to 5 miles per hour. For many drivers, an overnight charge will give them enough range to make their daily commute and back, but an all-day charging time would be needed for longer trips.

The power usage from a Level 1 charger is comparable to running the dishwasher, making a pot of coffee, or using an electric oven. In short, it won’t add a ton to your peak kW rate, since it’s equivalent to adding in an additional appliance like those already in use. It’s still a great idea to charge when your other usage is low, especially if you have a time of use plan.

Level 2 chargers require installing a 240 V, similar to those used by household dryers. They are able to charge an EV much faster than Level 1 (closer to 20 miles of range per hour of charging), because they have a higher power output of between 7-19 kW. You will know that you are using a Level 2 charger because it will need to be purchased and installed by an electrician. The hardware for a Level 2 charger may be sold by the car company (e.g. Tesla), or by a charger company (e.g. ChargePoint, Grizzl-E, or  Emporia EMEVSEVAR).

If you use a Level 2 charger, you are more likely to incur high demand charges, because the power (or rate of energy used) is higher. To mitigate this, try to charge while you aren’t using other high-power appliances - after midnight tends to be a good time that also coincides with the lowest electricity prices. Also, keep an eye out for smart electrical panels, which can help minimize the power load of other appliances throughout the home automatically.

Depending on the rate schedule your utility uses, there can be a lot to keep track of to get the most economical charge. Luckily, apps are being released to do this optimization for you, using data from your vehicle.

OptiWatt is an app that is available now for Apple and Android users, with the goal of saving money while also reducing carbon emissions. They do this by optimizing charging with respect to the grid’s load demand. The app is free, and OptiWatt does not plan to make money from the app user, but instead from utilities, by helping them reduce peak demands.

EV.Energy is another great app option, with similar features to OptiWatt. They have a greater emphasis on incorporating home solar power to the charging algorithm, making it a great option for homeowners with solar panels. This app also has a rewards component, giving users points for using the app.

Is it actually cheaper to charge at home?

Although home charging offers you more control over when you charge, not all drivers have the option to switch to a time of use plan. In regions with high kWh electricity costs, sometimes the home charging price just doesn't compete with free or low cost public charging. Public Level 2 charging is often charged at the local commercial rate, which tends to be a bit lower than the local residential rate.

One driver from Southern California explains, “The level 2 chargers at my two closest stations cost $0.21 per kWh and $0.25 per kWh. My home rate is $0.25 per kWh, and if I go over my baseline it goes up to $0.34 per kWh.” For this driver, it is always cheaper to charge at a public station. Especially if you’re on a tiered system, it may make sense to consider topping off, or convenience charging, while out.