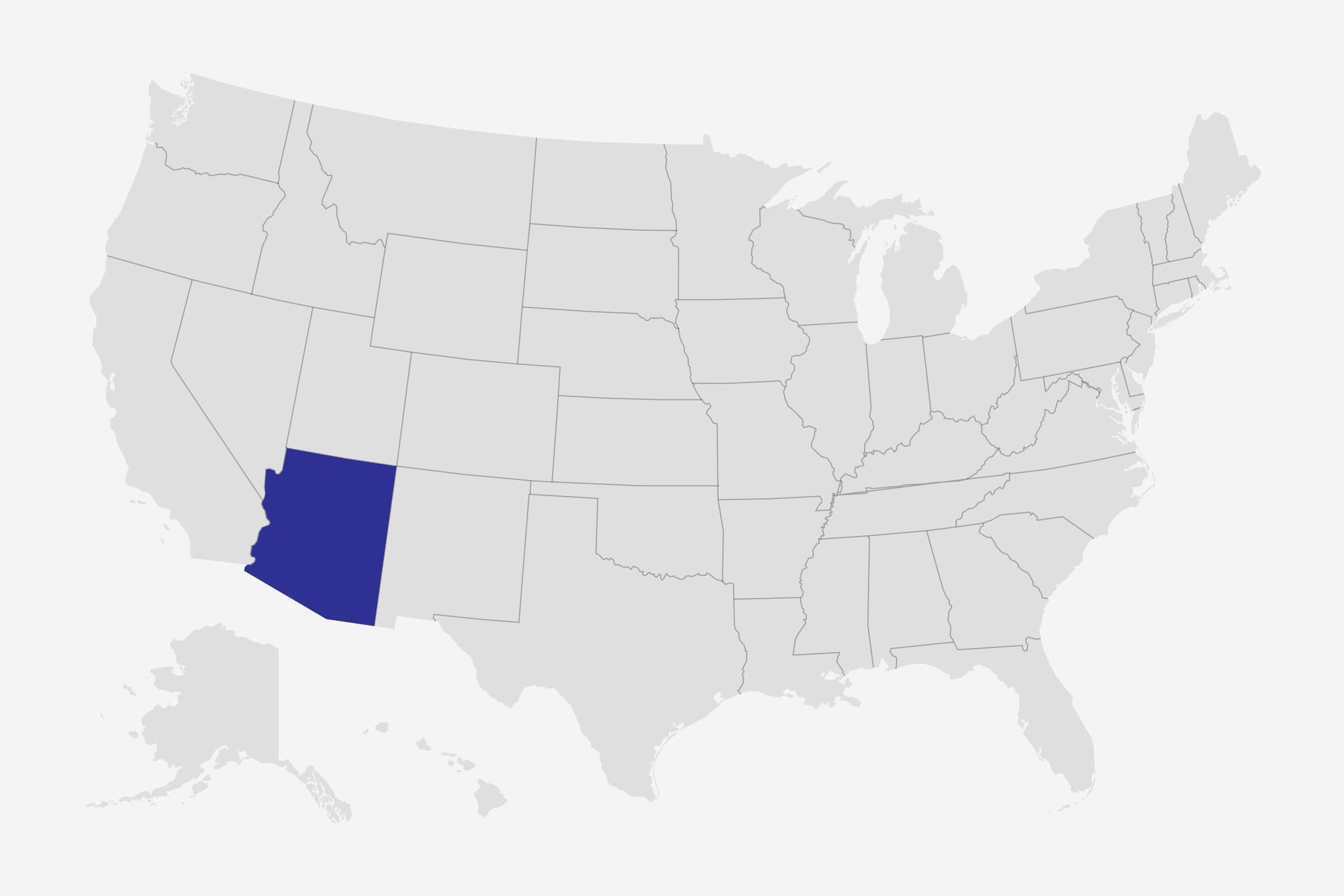 As the world shifts toward clean energy, Arizona’s adoption rate for electric vehicles has accelerated and it is now amongst the top 10 states with the most electric vehicle registrations.

According to the report by the Alternative Fuels Data Center of the United States Department of Energy, Arizona has the seventh highest number of electric cars - around 28,770 EVs. On a population-weighted level, this means that 4 in every 1000 people in Arizona have an electric vehicle.

There are three manufacturers of Electric Vehicles in Arizona today: Lucid Motors, Nikola, and Electra Meccanica. Arizona is also a hotbed for the entire clean tech sector, with battery production and battery recycling companies flocking to the state. These companies support the rapid adoption of EVs in Arizona.

Adoption of EVs in Phoenix and Tucson

The adoption of EVs in Arizona is most evident in two of its major cities - Phoenix and Tucson. In Phoenix, the government has 10 EVs in its fleet.

In August 2019, Phoenix established an Electric Vehicle Ad-Hoc Committee. The responsibility of the committee is to examine the challenges of implementation, finance, and access to EVs. The committee’s goal is to achieve a 30% increase in the adoption of EVs.

Tucson has also seen rapid adoption of EVs with the help of Tucson Electric Power.

Currently, Arizona has 861 public charging stations, with 2211 ports for charging.

According to the report by Tucson Weekly, the state intends to increase the number of its EVs. However, the relative lack of charging stations is a major challenge. The PIRG Education Fund stated that there is a need for more charging stations if Arizona is to achieve 10% EV ownership in 2030.

According to the report by the Phoenix Business Journal, Arizona is expected to receive $76.5 million from the US Department of Transportation for EV charging stations over the next five years. EV advocates say that these funds will fill the gaps for EV adoption.

For instance, over 2022, the state expects $11.3 million to shore up charging stations along the six eligible interstate highways. The next phase of investment will target rural and underserved communities. These demographics are often best served by inexpensive and clean transportation options, but are least likely to have the infrastructure to make the switch.

The Cost of Using Electric Cars in Arizona

The cost of driving an electric car is cheaper when compared with gasoline vehicles. Some models of EVs are about six times cheaper for each mile. This is based on a report released by the Zero Emission Transportation Association. According to the report, the cost of electricity is not as volatile as gas prices. For example, as gas prices have risen due to international conflict in Spring 2022, demand for EVs on cars.com rose over 112% between February and March 2022.

In Arizona, gas prices are generally just above the national average, meaning that a driver who switches to electric will save more than the average American driver. As of June 1, 2022, the average price in Arizona is $4.97/gallon, which is the state’s highest recorded average price. This is compared to the cost of electricity, which is between $0.12 - $0.15 per kilowatt hour. This means it might cost $55-$60 to fill up a 12-gallon gas tank, but only around $10 to recharge a 70-kWh battery.

Temperature and Terrain Issues for EVs in Arizona

Both temperature and terrain have major impacts on the short term range expectations for electric vehicles. And, Arizona is known to have a lot of variability in both of these factors.

Most people who visit Arizona make some time to explore the state’s majestic mountains. While beautiful, it’s important to know that driving uphill can lower your short-term range, while driving downhill can extend it. This is very similar to a gas powered car - it simply takes more energy to go up than down.

Arizona is also known for its different temperatures. This image from By Adam Peterson (CC BY-SA 4.0, https://commons.wikimedia.org/w/index.php?curid=50213511) shows the climate types across the state.

The hot desert regions of the state can pose risks to both short term range expectations and long term battery health. In the short term, very hot weather can reduce the available range of an electric car. In the long term, EV drivers may want to find cars that have robust cooling systems for their batteries, or ensure they have a garage to park in when it’s very hot. While heat is one of the main drivers of battery degradation, electric vehicles can do very well if properly cared for.

Incentives for Adoption of EV in Arizona

Like many states, Arizona has a suite of laws and incentives to help speed EV adoption and is a signatory on the Regional Electric Vehicle West plan. Its pro-EV laws include government fleet electrification targets, EV access to the HOV lanes and restricted parking, exemptions for emissions testings, and utility incentives. However, many of the big incentive programs are championed by the utility companies, which are required to register new adoption plans every 3 years and report on progress annually.

The Salt River Project is an Arizona utility that offers many programs to support EV adoption. It has offered rebate programs, home charging incentives, and preferential time of use rates for EV charging. SRP also has an incentive to encourage workplaces to install the EV chargers by offering a $1500 rebate for private companies and $4000 for non-profit organizations, schools, and the government installations.

Tucson Electric Power is another utility which has EV programs. They offer a $500 rebate for purchasing and installing EV chargers in the home, along with time of use and EV charging rates for customers. They also offer incentives and rebates to businesses.

Arizona used to offer tax breaks for the purchase of an EV, but this program recently ended. Taxes for alternative fuel vehicles are now levied at $4 per each $100 of valuation. Vehicles registered before 2022 are still eligible for reduced tax rates of 1%.

Is Arizona a good market for EVs?

With the current Arizona EV trends, it is safe to say that the state serves as a viable market for electric vehicles. The sale of EVs is on the rise.

The demand for electric vehicles is huge in Arizona right now. However, the supply rate is yet to match the demand. According to the Sales Rep for Sanderson Ford, Dallas Germundson, car dealerships in the state are getting tons of phone calls from people who need electric cars as an alternative to the hike in transportation due to the gas prices.

According to him, a person who orders an EV would have to wait for 2-6 months before getting one. In spite of the long wait, EV owners believe it is worth it. This is because the gas prices do not appear to be coming down in the near future.

Is Arizona a Good Place to Buy Used EVs?

As of January 2022, Arizona had the 11th highest used EV inventory in the country. Six months later, it is now the fifth highest used EV inventory behind California, Texas, Florida, and New York. This rise shows how much attention and interest the EV market has in the state. Note that we only track battery electric and plug-in hybrid models – traditional hybrids like the original Toyota Prius are excluded.

The average cost of a used EV in Arizona is also lower than the average price in many other high-inventory states. Only California and Ohio have lower average prices.

There are well over 100 vehicles listed under $20K, including older Nissan LEAFs, BMW i3s, Ford Fusion Energis, VW e-golfs, and Chevy Volts. There are almost 200 listings under $30K, which are mostly newer versions of the same vehicles. There are relatively few very high end listings, with only 20 listings above $100K and around 100 listings over $70K. These high end options include mostly Teslas.

In terms of the models that are listed in Arizona, the breakdown of cars in inventory mirrors what we see in other Western states.

When we look at the model year distribution, though, there are more 2018 models listed than usual, and fewer 2021 models. A relatively older inventory may explain the lower average listing price in Arizona, as many other states have a lot of 2021 inventory, which tends to be higher priced.

67% of our Arizona vehicles are Teslas, 13% Chevrolets Bolts, and 7% Nissan LEAFs.

The model year representation in our fleet skews towards newer vehicles.

The average expected range in our Arizona cars is 246.71 miles on a full charge, which reflects the relatively new cohort of vehicles. Similarly, the average dashboard range is 229.22, which is 93% of the original range average. Especially for such a hot climate, the batteries in our Arizona vehicles are doing pretty well.

If you remove the Teslas from the data, since they tend to have high ranges, the average EPA range drops to 155 miles, and the current dashboard range to 152 miles.