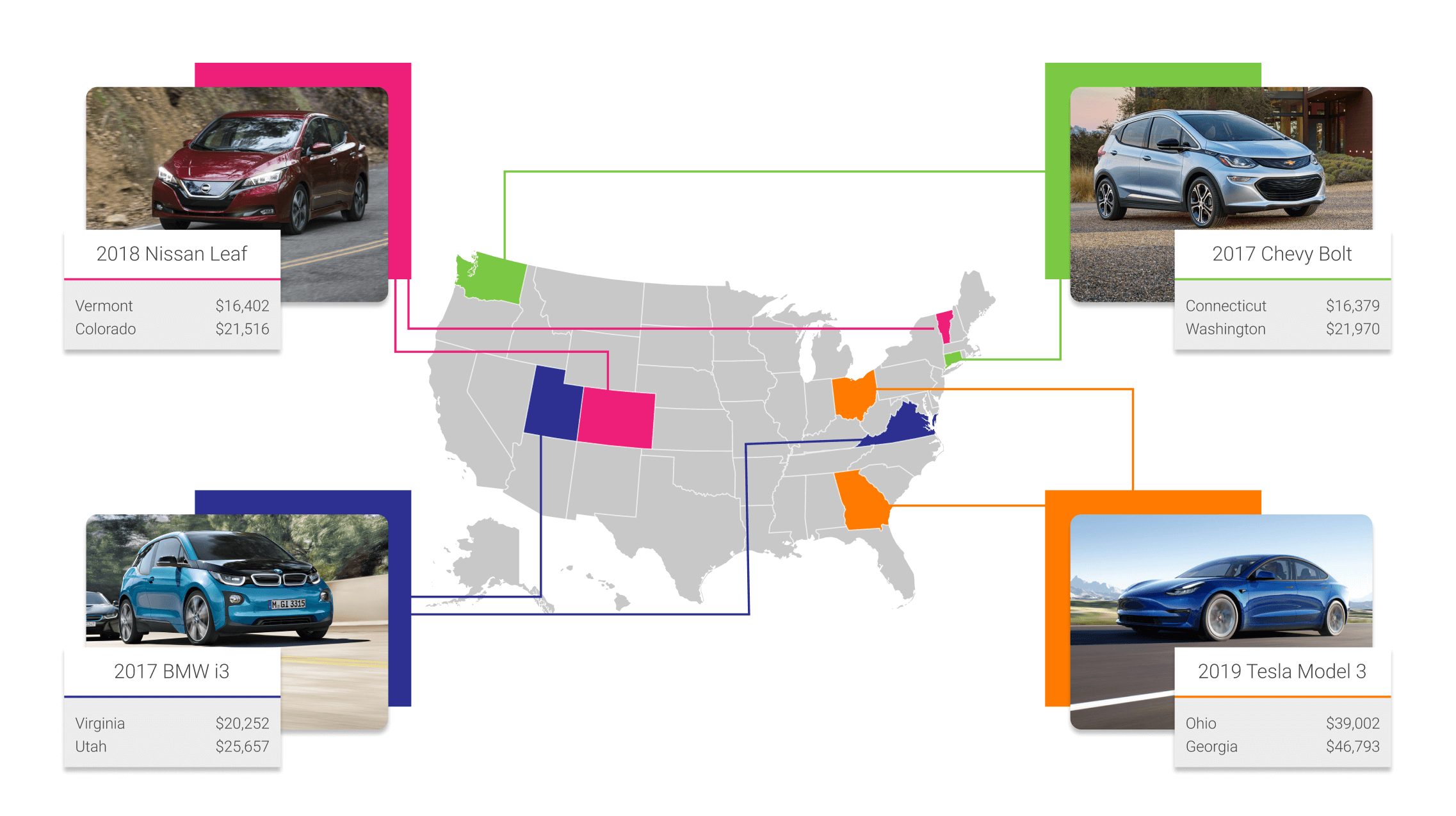 How Much Does a Used EV Cost?

The world used to be much smaller. Products moved around the globe more slowly -- even between nearby cities -- and the cost of goods reflected that. Modern transportation and logistics have made it cheaper and faster to get a new Ford from Dearborne to San Diego. Aside from state-level incentives or fees, the sticker prices are fairly consistent.

That is not always the case with used cars, and our research shows that used electric cars are not an exception.

There isn’t a hard and fast rule about where EVs are more expensive, but there is a very wide range in the prices for popular models state to state. It’s common to see a $5,000 spread between states. If $5,000 does not sound like a lot of money, consider the difference between a $15,000 car and a $20,000 car. That’s a 33% difference!

Economic inflation tracking typically uses a standard basket of goods to avoid a single item throwing off the whole analysis. We used a similar approach by looking at a representative sample of popular vehicles and taking national averages so we could compare the vehicle bundle price in each state. The models we included in our bundle are: 2017 BMW i3, Chevy Bolt, Tesla Model S; 2018 BMW 530e, Honda Clarity, Nissan Leaf; 2019 Audi e-tron, Tesla Model 3, VW e-golf. To compare state averages, we only look at models for sale in the state.

The findings surprised us. Occasionally neighboring states, without dramatic policy differences that would affect taxes or rebates, had different prices for the used electric cars that we tracked.

The California used EV market is the largest in the country, with almost four times as much in inventory as the next biggest market: Texas. You can find any price or level of luxury. The average price for our vehicle bundle in California is $30,715 - just under the nationwide average of $31,031. Notably, 2018 and 2019 Model 3’s can be found around $42,500, around the same price as a 2015 Model S.

Washington had no 2019 e-trons or 2017 i3’s left on the market this month, but it’s a great place to look for a Nissan Leaf. However, the Washington average, excluding the two missing models, was $27,069 - higher than the national average of $25,900. Washington does offer sales tax exemptions on used EVs costing under $45,000.

Texas is a Tesla state with almost double the amount of listings for Teslas as for BMW, the next most popular EV brand. It also has the cheapest average price for a 2018 Model 3. The Texas state average cost is about the same as in Florida - $31,367 to a national $32,258. However, there are some high-end models available here: newer Model X are around $90,000 and five Karma Reveros are for sale with an average price at $142,000.

BMW is the most popular overall make, but Chevy Volt and Leaf are most stocked models, with average price across years around $15,000 for both. The state has very few Model S or Bolts in stock. The vehicle bundle average in Arizona is $30,209, only a few hundred dollars more than the nationwide average of $29,870.

Should I Shop for an EV Between States?

Yes, 100%. It is worth looking for your electric car across state lines since many retailers will ship vehicles from out of state. Even with delivery fees, you still may find your dream car within your budget.