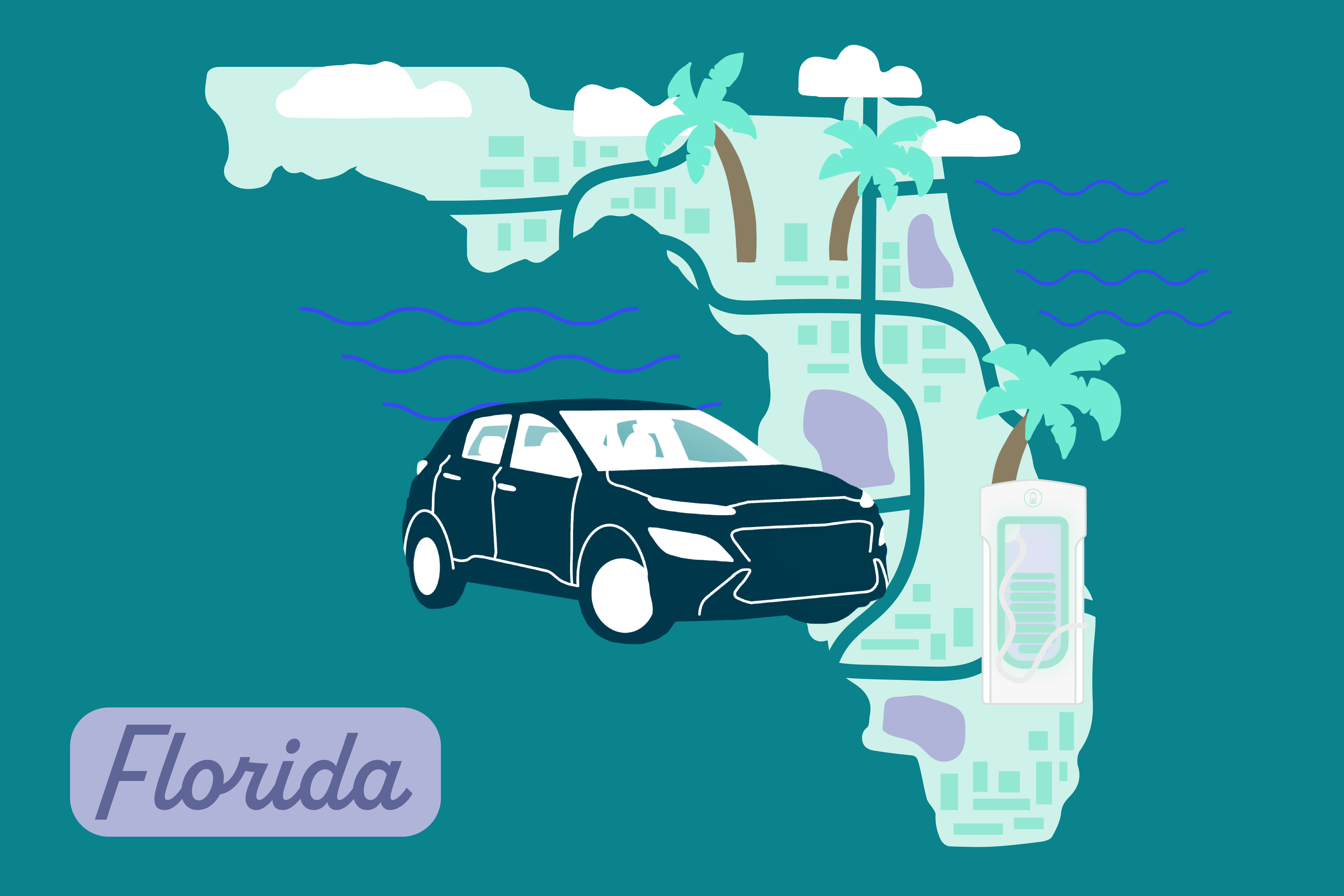 Florida recognizes that demand for electric vehicles is growing. In fact, the state has the second highest number of EV registrations as per the US Department of Energy in June 2021. Below you will find how the state is supporting electric vehicles (EVs), as well as other factors to consider when buying a new or used EV.

What incentives and programs does Florida have to aid EV adoption?

When deciding to invest in a new or used electric vehicle, it is useful to consider what incentives and credits are available. First, Floridians can use the federal EV tax credit, for up to $7,500. This credit, however, has a cap for each vehicle manufacturer. Both Tesla (Florida’s  most popular EV manufacturer) and General Motors have reached this cap. The state also has a couple incentives to lower costs. One is within Florida Statute 163.08, which allows property owners to apply for financial support and funding from their local government to install electric vehicle chargers on their property. Second, some car insurance companies across the country have higher rates for electric vehicles, so within Florida Statute 627.06535, it is illegal for Florida insurers to have surcharge premiums for EVs.

Many local utilities have their own incentive and rebate programs. In northeast Florida, Jacksonville Electric Authority (JEA) offers a $7 rebate per month for customers who charge their EVs during off-peak hours (10pm - 7am Monday through Friday, and anytime during the weekend). In general, charging during these hours prevents unwanted demand charges. Kissimmee Utility Authority (KUA) in central Florida offers a $100 rebate for customers who buy an all-electric vehicle and an extra $100 rebate for those who install EV chargers in their home. The Orlando Utilities Commision (OUC) has a $200 rebate for customers who buy or lease an EV. OUC customers can also receive a $50 gift card for just test driving an EV at a partnering dealership!

Lastly, an EV will cost less to maintain and “fuel” over time. Florida’s electric utility prices are 2.5 times cheaper than gasoline fuel. Maintenance for EVs is also much simpler and therefore cheaper than traditional internal combustion engine vehicles. There are fewer moving parts, no oil changes, and the regenerative braking feature of EVs (charges battery while braking) leads to less frequent brake pad changes.

Mild temperatures are optimal for EV battery performance and longevity. Li-ion batteries perform best between 60°F/15°C and 95°F/35°C.  At extreme high temperatures, material degradation takes place, which causes permanent capacity loss. Vehicles that spend an extended amount of time in high temperatures will need battery replacements sooner. Florida’s climate is mainly sub-tropical. The figure below shows the average temperature over the entire year. On average, most of the state is experiencing weather within the ideal temperature window. However, because Florida can have many days above 95°F, it is recommended to store EVs in shady areas or garages when possible. It is also worth noting that at hot and cold temperature extremes, drivers will be using climate control. The vehicle heating and air conditioning is also powered by the battery on-board, limiting the range for that trip.

Another positive attribute Florida has for EVs is flat terrain. The high power loads required on steep steep hills can also affect the lifetime of the vehicle battery.

In response to many vehicle manufacturers announcing their transition to electric vehicles, and to meet the transportation demands of the state’s large population and tourism industry, Florida is investing in electric vehicle infrastructure. In July 2021, the Florida Department of Transportation (FDOT) released an Electric Vehicle Infrastructure Master Plan (EVMP). The main goals of this plan are:

Currently, Florida has over 2,400 Level 2 and DC fast charging stations (see figure below). In other words, there is one public charging port for every 19 EVs. As part of the EVMP, Florida aims to have a charging station every 40 miles along the state highway system by 2025. Then by 2035, there will be charging stations every 25 miles. The recent federal bipartisan Infrastructure Investment & Jobs Act will help Floridal reach this goal, as the state will receive $198 million over the next 5 years to build EV charging stations.

Due to the intense hurricane season that is typical of the region, grid and infrastructure resiliency is crucial. The EVMP has incorporated redundant power feeds to charging stations into the plan. If redundant power is not possible, backup generation should be onsite.

Is Florida a good place to buy a used EV?

Florida has a strong used EV market with over 1470 vehicles in inventory - third highest in the nation. However, the large used inventory is accompanied by an expensive average price - $45,456. Compared to other states' average used EV cost, this is on the high end.

In fact, the highest priced used vehicle in Florida is the Tesla Model S, which can go for $170K, which is $20K more than the price in other states.

That doesn’t mean there aren’t less expensive used EVs available in Florida. The least expensive vehicle in inventory at the end of January was a 2012 Nissan LEAF for just $5K. While such a relatively old and inexpensive used EV may not offer a ton of range, it could be a perfect vehicle for someone with a short and predictable commute, and who has easy access to charging. There are around 120 used EVs priced under $20K in the state, including older Nissan LEAFs, Chevy Volts, Fiat 500e’s, and BMW i3’s.

With a slightly higher price point, there are 275 used vehicles under $30K. In addition to the vehicles above, there are Cadillac ELRs, Ford Fusion Energi’s, and newer versions of LEAFs, Chevys, and BMWs. The newer versions often have upgraded battery packs that offer more range, but particularly with LEAFs, be on the lookout for older models with battery upgrades - these can be secret bargains.

There are a lot of high end used EVs available in Florida - around 400 vehicles above $60K. These include newer and performance model Teslas, Audis, and BMW i8’s. There are also several Karma Reveros available used, which is a rare vehicle to find on the market. Most older Teslas and the bulk of Model 3’s are for sale between $45K and $55K.

Florida’s used EV inventory stands youtube because of how many newer model vehicles are for sale. This may partially explain the higher average used EV price, but it also means that a used EV is likely to have very close to its original, EPA rated range.

Florida used inventory is dominated by Tesla, slightly more so than across the rest of the country. The four current models make up 56% of used stock.

Recurrent tracks 541 battery electric (BEV) and plug-in hybrid electric (PHEV) vehicles in Florida. Looking just at the BEVs, the average daily mileage for cars in our fleet is about 29 miles, with most drivers going between 11 and 46 miles a day. This is a range that essentially any BEV can cover, so even older used EVs with a limited range will suit the majority of Florida drivers.

Despite the fact that the hot Florida climate can be bad for EV batteries, we see that in our fleet, the batteries are holding up fairly well. Out of the average EPA rated range of 265.5, the average current range for Recurrent EVs is 250 - 94.3% of the original range is retained, on average. This makes sense, given that 70% of Florida Recurrent vehicles are Teslas, which have very sophisticated battery management systems to protect their batteries and range.

In terms of the model years represented in Recurrent’s fleet, 2018 vehicles are most popular, with 2021 being next.

If we exclude Teslas from the data, the average daily mileage stays about the same at 25 miles a day, and surprisingly, the average vehicle gets 98% of its original, EPA rated range.