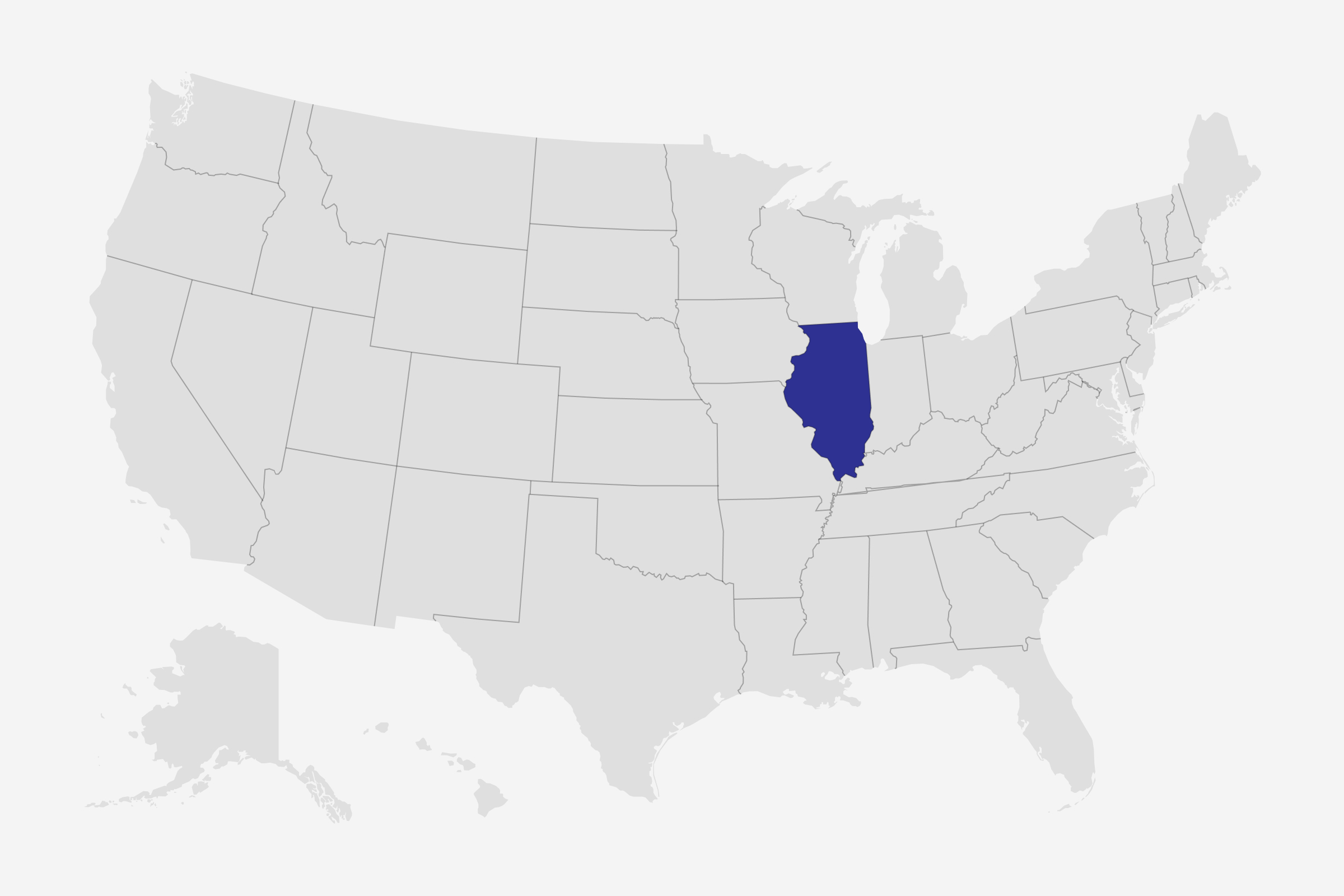 In recent years, Illinois has increasingly become a hot spot for electric vehicles. Illinois currently holds the eighth highest number of electric vehicle registrations, totaling about 2.6% nationwide, behind the coastal states you might expect like California or New York.

Electric vehicles fit into Illinois’ statewide clean energy goals and new green legislation. Overseen by the Illinois Commerce Commission, Illinois launched a plan in 2021 to put 1 million EVs on the state's roads by 2030, totaling over a fifth of all cars. Thanks to Illinois’ commitment to expanding access to green energy, in 2020 electric vehicle growth had its best year yet with sales increasing 26% year-over-year. There has been an exponential increase in electric vehicle registrations from 2014 through 2020, as depicted in the chart below “EVs in the State of Illinois,” suggesting Illinois’ market as ripe for continued growth.

Illinois’ electric vehicle boom is also in part due to the state’s support of advocacy changes and partnerships with nonprofits like Chicago Area Clean Cities. Clean Cities has received support from the U.S. Department of Energy since 1994, and has met challenges and transformed transportation in a six-county region that includes Cook, DuPage, Kane, Lake, McHenry, and Will counties. Through nearly three decades of advocacy work, Chicago Area Clean Cities has supported the growth of access to electric vehicles, and expanded environmental changes such as:

While a large concentration of electric vehicles fall in the greater Chicago area, the state is also pouring energy into expanding electric transportation statewide. In line with the federal administration’s goal to have half of all new cars sold in the U.S. be electric by 2030, Illinois is enacting plans to encourage drivers to make the switch to electric.

In the last year, Illinois lawmakers enacted legislation to incentivize residents; one big incentive program lies within the Climate and Equitable Jobs Act (CEJA). CEJA includes provisions to phase out carbon emissions from the energy and transportation sectors. The Illinois EPA is directed in CEJA to establish rebate and grant programs for electric vehicles and charging stations and oversee the phase-out of fossil fuel-fired electrical generation units.

Beginning July 1, 2022, a resident of Illinois that purchases an all-electric passenger vehicle in Illinois will be able to apply for a $4,000 rebate. Combined with federal tax credits, Illinois’ rebate can lower the price of an electric vehicle by more than $10,000. Residents must apply for the rebate within 90-days after the vehicle purchase date, and must retain ownership of the vehicle for a minimum of a year immediately after the vehicle purchase date. Only one rebate will be issued to a purchaser in any 10-year period.

In line with the Illinois Commerce Commission-approved Beneficial Electrification Plans, Illinois has also embarked on a charging incentive program. The state will provide funding for up to 80% of the cost for public and private organizations alike to install and maintain charging stations, which will help the state reach its goals to increase access across the state.

Real-world electric vehicle range depends on real-life conditions such as terrain, load, speed, and outdoor temperature all directly related to the vehicle’s efficiency on any given trip. Cold weather is the most dangerous for electric vehicles, and is commonly known as the most notorious range-killer. EV owners often assume range loss in cold temperatures is due to reduced battery performance, but in fact the real culprit is the auxiliary heater (and similarly, the air conditioner in the summer).

Illinois has a widely varying climate due to its mid-continental location and nearly 400-mile length. Most of Illinois has a humid continental climate with hot, humid summers and cool to very cold winters. The southernmost part of the state, from about Carbondale southward, and the eastern suburbs of St. Louis, has a humid subtropical climate with more moderate winters.

With such varied weather, cars will lose range in both the hot summers and cold winters, and may need to be recharged more frequently in the days of extreme climate.

Illinois gas prices are slightly above the national average, meaning that electric vehicle drivers will save even more than drivers in other states.

As of May 2022, Illinois has 874 public electric vehicle charging locations available, with more on the way.

Jumping to a million EVs will require more than a few new charging stations, and Illinois’ market is ripe for continued exponential upward trends.

Is Illinois a good market for used EVs?

Over 2021, the used EV inventory in Illinois has risen to fifth highest in the nation, neck and neck with New York State. The average used EV price in the state is $50,927, which makes it a moderately high priced market compared to other high-volume states.

In terms of what models are in inventory, used Model 3’s make up over ¼ of all the stock, and Teslas are overall around 60% of used inventory. In order of popularity, the Model S follows the Model 3, and then the Model X and Model Y. Since the Model Y is a newer release, there are likely fewer on the secondhand market.

The e-tron and LEAF are next most popular after the Model 3, Model S, and Model X, which is interesting because they are battery electric models, rather than hybrids, which usually take the top spaces. The Fusion Energi and Prius Prime, usually very popular models in inventory, make up only 7.3% of available models. This may be because the used inventory for these hybrids has been bought up already, or because owners are holding on to them until more new vehicles are available.

Make and Model
# in inventory

Another interesting trend comes from looking at model years. Most states have an anomalous abundance of 2021 models in used inventory, likely because recent owners found they could trade in or sell their gently used vehicles for wild profits. However, in Illinois, there are fewer 2021 models in stock than we see in other popular EV states.

Instead, we see what we expect in terms of model years: 2018 is the most popular, followed by 2019. There is a slight bump in 2021 model year inventory, but nothing like what is being seen nationwide.

Make and Model
# in inventory

Recurrent tracks 289 vehicles in the state of Illinois - 269 of which are full battery electric, and 20 of which are plug-in hybrids. For the battery electric vehicles, the average daily mileage is just over 30 miles - meaning that almost any used EV could easily suit daily driving needs for an Illinois driver.

The average EPA range for EVs in the Recurrent fleet is 255 miles. Today, those same vehicles get an average real range of  238 miles, which means that they have held on to 93% of their original range. This may be due to the relatively cool climate that a lot of the state has for most of the year.

If you remove Teslas from our calculations, there are 85 BEVs and 20 PHEVs that we follow. The average daily mileage drops to 24 miles, but the percentage of original EPA range retained stays at 93%. Non-Tesla vehicles seem to lose range at the same rate as Tesla vehicles in Illinois. However, when you look at the age of Non-Tesla EVs, 23% are from 2017, meaning that they are a proportionally older cohort. After Tesla, Chevrolets make up 55% of the Recurrent fleet, followed by Nissans and Fords.