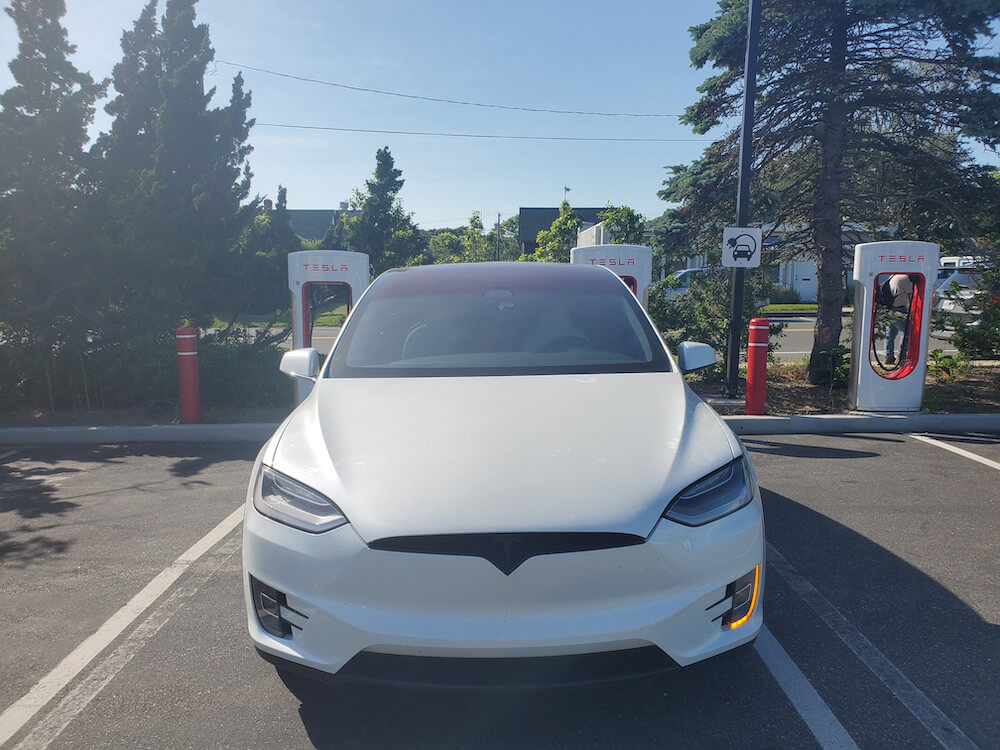 Readers - I am excited and anxious to write this. Excited because my Tesla Model X journey went much more smoothly than I could have anticipated, and anxious because as an electric vehicle professional, it should not have taken me so long to get into a Tesla, let alone this car. It is my friend’s 2020 Model X Performance, and it was an amazing road trip car. It would also be a good choice for an EV newbie - I didn’t look at a single map, app, or planner before I left. The vehicle’s trip planner let me know when and where to stop to charge, and even for how long.

I was anxious when I went to pick up the Tesla the other day, too, since this is definitely a more expensive car than my usual budget rentals or 2017 Mazda 3. Since my friend hadn’t driven it much lately, he warned me that it was low on charge and I would need to recharge it soon.

The car was at around 27% when we got it, which seemed perilously low to me, but in reality, that’s around 90 miles. It was more than enough to get us 12 miles out of the city to a Tesla Supercharger near the highway. With a full charge, the Model X Performance gets an EPA rated 341 miles of range, with a combined efficiency of 90 MPGe. Of course, I would be mostly on the highway, so my efficiency would be in the high 80’s (or lower, if i found a place to floor it).

Getting out of town was a little sloppy, since the acceleration is more than I expected, and traffic is about as bad as always. Notably, regenerative braking, which was set to “normal,” did not phase me - it felt a lot like taking your foot off the pedal in second gear. As I got onto the highway, a commercial truck was in the middle lane and the car shouted warnings as I tried to merge into the right lane - autopilot was trying to prevent a collision that was not going to happen. Once the truck passed, everything calmed down. However, it’s a good reminder that with so much tech, you’re not totally alone in the driver's seat. I turned off “navigate with autopilot” on the screen. Soon, I turned off the highway to go charge.

First anxiety: will I know how to charge? I write about, talk about, dream about EV charging and efficiency, but I have never actually gone to a Tesla SuperCharger and plugged in. I backed up into a row of already charging Teslas, since the other cars gave me a hint about where to find the charging port. I had no idea how to open the port door, but my partner pressed it and it opened. With totally fake confidence, I grabbed the cord, which is not very different from a gas nozzle, pressed the design-y button on it, and started to charge. I’m not sure if you actually have to press that button, but overall, charging was very easy and intuitive.

The navigation system said we only needed to charge for 15 minutes in order to get out to our destination, but we had some errands to run, including replacing the key fob battery, because the car was flashing warnings that the battery was low. Tip: the hardest part about changing the key fob battery was finding the battery in stock. The rest was like changing the batteries in your remote.

Unlocking and removing the charger took a second longer to figure out, because the port locks when charging, but it was obvious when the charger was locked in (because it was hard to pull out). After pressing a few buttons and waving the key fob around, it disengaged and we were on our way. Turns out, you can unlock the charge port in a few different ways: the on-screen car manual told me all about it.

Back on the highway, the ride was really smooth. So much so that when we hit the typical NYC-area potholes, the car automatically adjusted its suspension “to provide a smoother ride.” Nice. I was impressed that the air conditioner did not have any major negative effect on the range estimates, and I appreciated that the headlights came on automatically when I was in the shade.

Here are a few of my other observations, and I’d love to hear yours! Drop us a line and we'll share some EV road trip gems from our community.

None of the Tesla chargers were out of service, and we got a pretty decent charge rate that was consistently over 80 kW, but not the “200 miles of range in 15 minutes” that Tesla advertises.

This trip also helped me see how not being able to charge at home would dampen the EV experience, especially when you’re on a schedule. At one of the charging locations, none of the stores were open at 10:30 AM when we stopped there, so the bathroom option was the bushes. 15 minutes here and there is not the end of the world, but it is more of an impact than filling a gas tank.