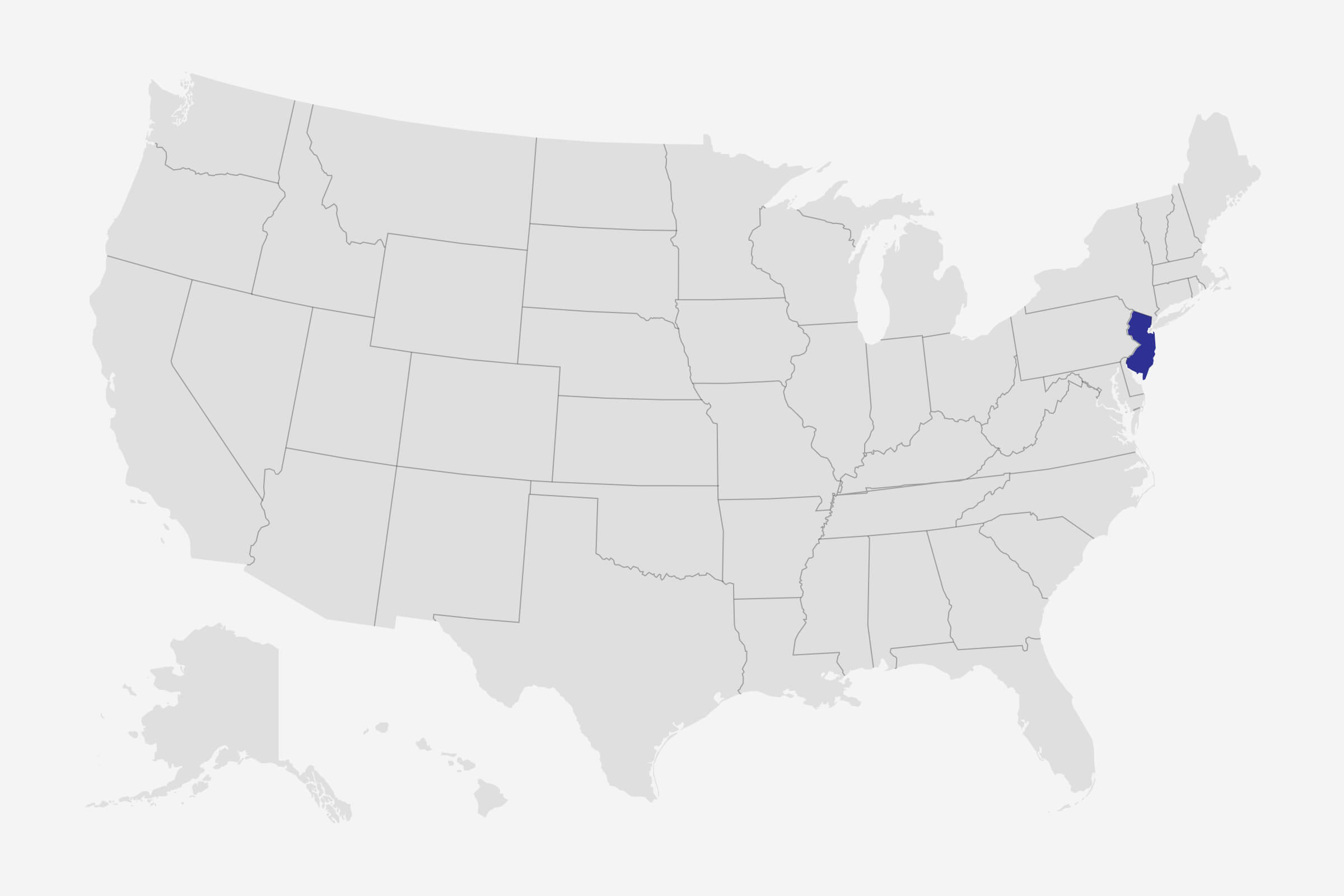 Over the past decade, New Jersey has consistently recorded the top 6 highest EV sales volumes among states in the U.S. Within that period, the number of registered electric vehicles has risen astronomically, from just 251 in 2011 to over 49,000 in 2022. That’s more than a 1500% increase. More than 60% of that has come during the past few years alone, going by this report that shows there were just 10,000 registered EVs in 2017.

A combination of growing public interest, a raft of government policies, and the increasing cost-effectiveness and efficiency of EV technologies has created the perfect storm for the supercharged adoption of EV in New Jersey.

This is a trend that’ll only gain steam over the next few decades, according to experts. In fact, the state government plans to see another 1,000 fold increase in EV sales over the next few years with the passage of the New Jersey Electric Vehicle Act in 2020.

Is New Jersey a good market for EVs?

Over the past few years, growing public sentiment towards renewable energy has fueled the accelerated adoption of EVs. Both the government and the public are keen to replace fossil fuel dependence with cleaner, more efficient energy in the  foreseeable future.

Only a few other states have demonstrated a comparable level of zest towards electric vehicles. The rate of new EV sales in New Jersey is currently double the national rate. Reports across the board reflect this reality and project the trend continuing strongly into the future.

The chart below shows the states with the top EV registrations as of June 2022, according to the US Department of Energy.

And going by New Jersey’s Electric Vehicle Act 2020, the number of EVs hitting the road in the state will increase ten fold over the next three years, from the current 30,420 to over 300,000. This increase will bring the amount of EVs in New Jersey to 25% of all registered vehicles. No doubt, this is an ambitious goal with lots of obstacles, but it reflects the bullish mood in the industry. The current state administration is hoping to lay the groundwork for a full transition to a 100% clean energy transportation system by 2050.

What are the Incentives Driving EV Adoption in New Jersey?

The lofty ambition of New Jersey’s EV Act 2020 is backed by equally strong incentives. The state government is offering $5000 point-of-sale rebates for new, plug-in electric vehicles. The program incentivizes full battery electrics over hybrids by offering rebates on a per-electric mile basis. This means that an EV with a range of 200 miles will get four times as much of a rebate as a hybrid with only 50 miles of electric range.

The program is run by the Board of Public Utilities in partnership with dealers who provide the rebates at point of sales across the state.Qualifying vehicles include battery electric vehicles (BEVs), which offer all-electric range, zero emissions, lower fueling costs, and less maintenance, as well as plug-in hybrid electric vehicles (PHEVs), which offer limited all-electric range and an optional gas engine for extended travel without charging.

Other similar incentives include the ‘Light Duty Plug-In Electric Vehicle Rebates Program’, designed to stimulate the adoption of light-duty plug-in electric vehicles in the state over the next decade. Also, the Clean Fleet Electric Vehicle Incentive Program is incentivizing EV adoption in state-operated fleets, targeting a 100% transition to light duty electric vehicles by state-run non-emergency agencies by 2035. The Medium- and Heavy-Duty Electrification grant is designed to offset the extra cost of replacing diesel trucks with EV trucks in the state.

New Jersey municipalities and communities including schools, state universities, community colleges and state agencies will soon have access to grant money worth $7 million for electric vehicles and chargers.

Finally, in 2020, New Jersey joined the Regional Greenhouse Gas Initiative (RGGI) program, the tenth state to do so. The RGGI is the first program to bring direct, mandatory government intervention to markets to curb greenhouse gas emissions. The state government is looking to invest funds from the program to further incentivize EV truck adoption.

Is New Jersey’s Climate and Terrain Suitable for EVs?

EVs operate optimally in a range of friendly temperatures, beyond which, there may be temporary effects that limit the vehicle’s range and charge speeds. This is true of all lithium ion batteries, although different chemistries and battery management systems help offset these effects.. Generally, lithium ion batteries are at their best between 60°F/15°C and 80°F/26°C.

Fortunately, New Jersey falls into the EV-friendly temperature range for most of the year. The humid subtropical climate in South Jersey and the continental climate in North Jersey mean the region mostly enjoys moderate temperatures. The average hot temperature is 74 F/23 C while the average cold is 5 C/41 F. That means the temperatures do fall outside the optimal range in summer and winter, but for the most part remain within range.

During extreme heat days, drivers can protect their EVs by parking them in a shade or garage. If you need as much range as your vehicle offers, try driving during cooler times of the day. Also, know that turning on the air conditioner will have a big range reducing effect of  up to 17%.

Always check your tire pressure, especially around the hottest summer months of June and July, where the heat can easily make your tires under inflated.  Also, try limiting your charge below 80%, except when you’re going on a long trip, to minimize the risk of overcharging.

During the cold season, you may need to charge your battery more often than usual since  freezing temperatures can reduce your range compared to warmer days. Many EVs also use battery power to keep the battery warm, and many drivers opt to keep their cars plugged in for much of the winter.

It’s also advisable to keep a minimum charge of 20% since temperatures can easily swing quickly enough to impact your battery charge and range.

Terrain and road conditions are also important to your EV’s performance. Driving uphill reduces your EV’s range. New Jersey, for the most part, is relatively flat. The hilly terrain is mostly concentrated in the Northwest of the state, which is home to the Highlands and Kittatinny Valley. If you’re driving around this region, you can expect lower ranges, but you may make up some of the lost range with regenerative braking going downhill.

The EV ACT of 2020 aims to increase the current figure four fold by 2025, with 400 DC fast chargers and 1000 level 2 chargers to be made available by then. However, this figure pales in view of the state government’s goal of 100% clean energy by 2050. Experts estimate that to achieve even 5% of that goal, no less than 1300 DCFC and 48,000 Level 2 charging stations need to go live in the state by 2025. More landmark bills are expected to pass through the state congress as EV adoption continues.

Policies that make it easier to install charging stations in multi-unit buildings will also help drive EV adoption, as it is easier for people in dense areas to own and charge an electric car.

Is New Jersey a Good Place to Buy Used EVs?

The used vehicles inventory in New Jersey is one nation’s top-ten, currently with 3% of the nation's used electric car listings. Note that we only track battery electric and plug-in hybrid models – traditional hybrids like the original Toyota Prius are excluded.

The average price for a used EV in the state is also high, coming in at $52,575. While the least expensive vehicle for sale is a 2012 Nissan LEAF for under $10,000, the most expensive is a 2022 Tesla Model X for $153,000. There are many options in between these two price points, including a handful of budget-friendly options, such as older LEAFs, BMW i3’s, Toyota Prius plug-ins, and Ford hybrids.

For a comparison, here are the top states for used EV inventory with their average listing price.

Part of the reason that New Jersey has such a high average price is that 55% of the used inventory is made up of Teslas. In 2016 and 2017, the only models in inventory are Model S and Model X, which are already at a higher price point. More recent model year Teslas have held their value extremely well, and many have even gotten more expensive!

Next after Teslas, the highest inventory models are hybrids, such as Ford Fusion Energi and Toyota Prius Prime. There are no Chevy Volts or Bolts in inventory, which is notably since those models are popular across the country. Similarly, there are very few BMW i3s and Nissan LEAFs for sale. There are a handful of very new vehicles, such as the ID.4 and Mach-E for sale, but the “gently used” prices are not usually much less than getting one new, especially when you factor in federal tax incentives on new EV purchases.

New Jersey has fewer old cars compared to the rest of the country, which also helps explain the high average price. If we look at the model years in inventory in New Jersey, the year with the highest percentage in inventory is 2018. There are also a lot of 2019 models, and many 2021 vehicles. We suspect that due to the high demand for EVs throughout 2021, many new owners decided to resell their cars.

In terms of the vehicles that Recurrent tracks in New Jersey, there are 360 EVs, made up of 349 BEVs and 11 PHEVs. We track trends for our BEV drivers only, since with PHEVs, we cannot isolate battery driving from gas engine driving.

We see an average daily mileage of around 32 miles in New Jersey, which is about the national average. The average EPA rated range for vehicles on the road is 280 miles, and the average current dashboard range is 260 miles. This means that vehicles in New Jersey have held on to 92.8% of their original range.

Looking at the breakdown of model year in the New Jersey Recurrent fleet, we see that 2021 is the most popular year, followed by 2020 and 2022.

In terms of models represented in our fleet, we see 75% of them are Teslas and 11% are Chevrolets. High end brands such as Jaguar, Rivian, BMW are represented to a lower extent, as are Nissans, Fords, and Volkswagens.

If you remove Teslas from the data, the average daily mileage drops to 26.3 miles, and 2019-2021 models become the most prevalent. This suggests that most of the 2018 EVs in New Jersey are Teslas.