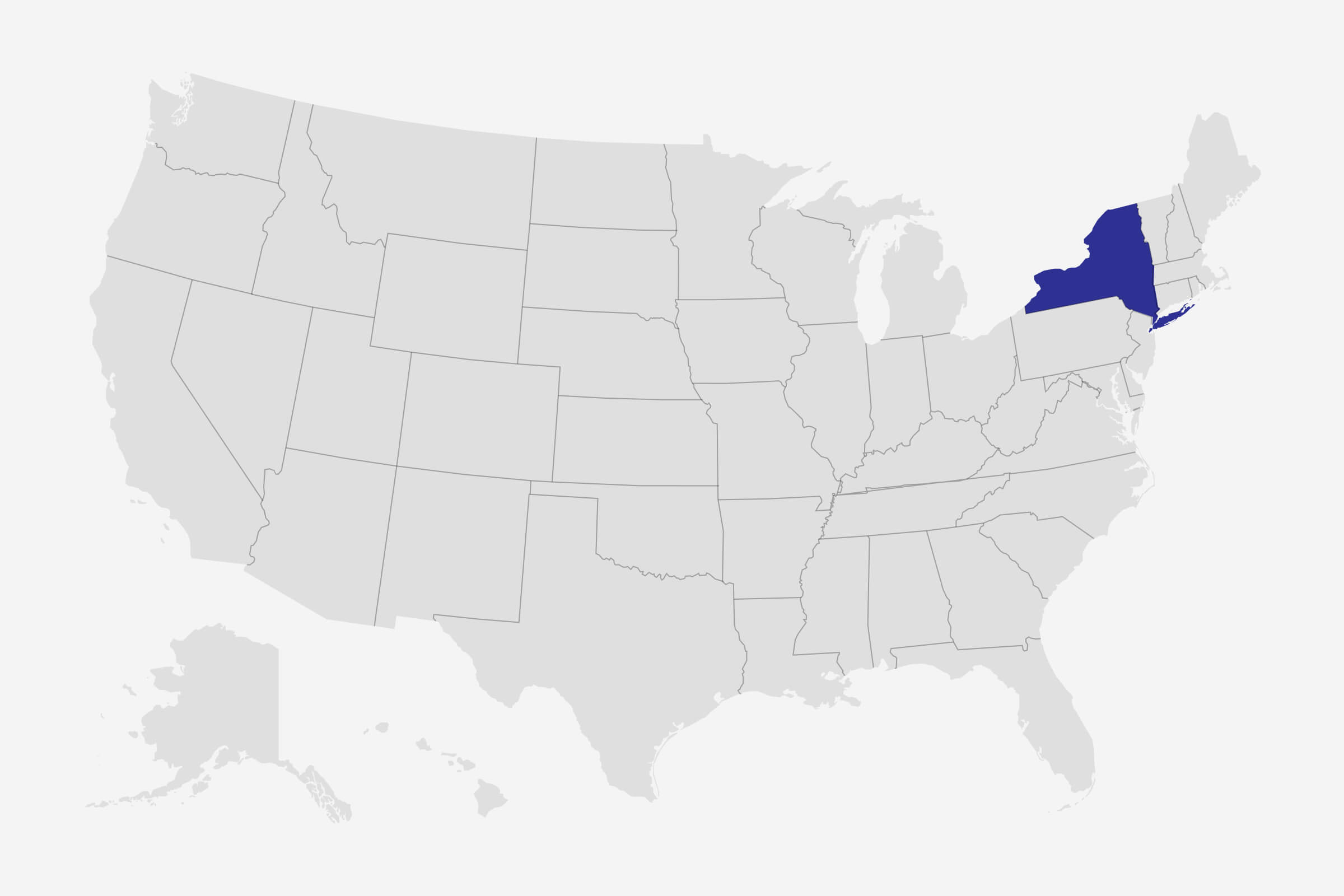 New York state has been heavily invested in clean energy and alternate fuel adoption for a while. Next to California, it has the second most incentives and pieces of legislation about electric vehicles in the nation. Electric vehicles fit into the statewide clean energy goals, and lawmakers have recently committed $250 million to charging infrastructure.

New York State is far more than the small area of New York City, but the city is also pouring energy into electrifying transportation, starting with the city fleet. Since so much of the state’s population lives in high density, urban areas, public charging will be critical to reaching goals.

When you think of EVs, you probably think of California. And, the common perception is true: California certainly does lead the nation in EV registrations, used EVs, and incentives. However, New York is the state with the second highest number of EV incentives (along with Washington) and is working hard to be a leader in clean energy and clean vehicles. EV adoption is spearheaded by the New York Power Authority (NYPA), the New York State Department of Environmental Conversation (DEC), and New York State Energy Research and Development Authority (NYSERDA), which together support programs to get one million EVs on the road by 2025. Charge NY is a suite of initiatives that offers rebates to buyers and promotes EV infrastructure.

One big state incentive is the Drive Clean Rebate, which offers up to $2,000 as a point-of-sale savings on new EVs. The rebate amount depends on the electric range of the vehicle purchased, with most BEVs getting the full amount.

Other perks of driving an EV include passenger limit exemptions for the HOV lanes (high occupancy vehicles) through 2025, emissions inspection exemptions, and funding for home chargers. There is also funding available to electrify commercial vehicles, trucks, and fleets.

The efficiency of electric vehicles depends on both outside temperature and terrain. EV batteries perform best around room temperature, and can see temporary range reductions when it is very hot or very cold. While more range is lost in the cold, there is no long term risk from owning and operating an EV in the winter; heat, on the other hand, does lead to long term degradation and capacity loss. In terms of terrain, EVs are not dissimilar to gas cars. They are less efficient going uphill, but can recharge their batteries on downhills. In general, EVs do best in city driving or at slow speeds, which capitalize on their regenerative braking. This means that EVs are perfectly suited for New York’s downstate region, which is densely populated and known for traffic.

The region’s densest populations, New York City and Long Island, are on the southernmost tip of the state. These areas are low lying and coastal, with mostly flat terrain and more mild winters. North of this, the terrain becomes more mountainous and winters become snowier and more forbidding.

However, the northern parts of the state also have much more mild summers than the humid southern parts. This means that cars will lose less range in the summer, but may need to be recharged more frequently in the winters.

New York gas prices are slightly above the national average, meaning that EV drivers will save even more than drivers in other states.

Meanwhile, residential and commercial electric prices in New York are higher than the national average by 45-55%. Luckily, many utilities offer rebates and charging incentives to lower the cost of owning an EV.

Many of these chargers are concentrated in the southern part of the state and near major highways. The state has also invested $250 million in charging infrastructure through 2025 as part of the New York Power Authority’s EVolve NY plan. This investment targets affordable, fast chargers at 50 mile intervals along interstate highways, with amenities nearby. The state sponsored chargers will charge only $0.35/kWh with no session or idle fees.

There is also the EV Make Ready Program, which offers funding for non-residential chargers. NYSERDA’s Charge NY also offers up to $4000 rebates per charging port for Level 2 chargers.

Is New York a Good Market for EVs?

Over 2021, the used EV inventory in New York State has become fourth highest in the nation. At the end of 2021, it remained in close competition with Illinois, Georgia, Ohio, and New Jersey for fourth place, but it now seems to have pulled ahead. The average used EV price in the state is $47,961, which makes New York a moderately high priced market compared to other states.

There are more than 100 different models available for under $25,000 in New York, including older LEAFs, Prius Plug-in and Prius Prime, Chevy Volts, Ford Fusion Energi, and even some newer Chevy Bolts. Around half the models are priced between $25,000 and $50,000, and more than 135 models are over $70,000. In the high priced, luxury bucket are Tesla Model X and Model S, Audi, and BMW i8. Note that in the past year, there has been very low depreciation on used EVs, so even older models of these luxury priced vehicles may be quite expensive.

The dominant model in used inventory is the Tesla Model 3, making up more than 25% of all available models. The Model S and Model X are next highest, with the Prius Prime and Ford Fusion Energi also in the top inventory models. Meanwhile, the Chevy Volt, very popular in many western states, has lower inventory in New York, along with the normally popular BMW i3 and Nissan LEAF. Overall, Teslas are more than 50% of the used inventory in the state, and their average price in New York is less than in neighboring New Jersey. Other popular models are about the same price.

We always like to take a look at the breakdown of model years in used inventory, since newer EVs tend to have higher EPA rated ranges, and have less range degradation than older models. In New York, like in many eastern states, the majority of vehicles are 2018 and later years, with 2018 and 2021 being tied for most popular year. Owners of new 2021 models were able to sell back their barely used cars at very high prices in the past months, so many drivers opted to make back their purchase price.

Recurrent has 461 EV drivers in New York - 420 fully electric drivers and 41 PHEV drivers. The average daily mileage for Recurrent vehicles in New York is 33 - slightly higher than the national average. Looking at the all electric vehicles, the average EPA range across the state is 259 miles, and the current average dashboard range is 242 miles. This means that New York vehicles, on average, retain 93.2% of their original range.

In order to understand what this means, we need to look at the model year of BEVs that Recurrent tracks in New York:

Almost 50% of the Recurrent fleet is from 2021 and 2020, meaning that significant age-related degradation has not yet occurred. Teslas make up 65% of the New York fleet, with Chevrolet coming in second at 18%. Ford and Nissan are tied at 5.2%.

If we look at the Recurrent driver pool without Teslas, the average daily mileage drops to 27 miles, and the average EPA rated range drops to 175 miles. The average age of the EVs in the pool also increases. New Teslas are overrepresented in Recurrent’s New York data.