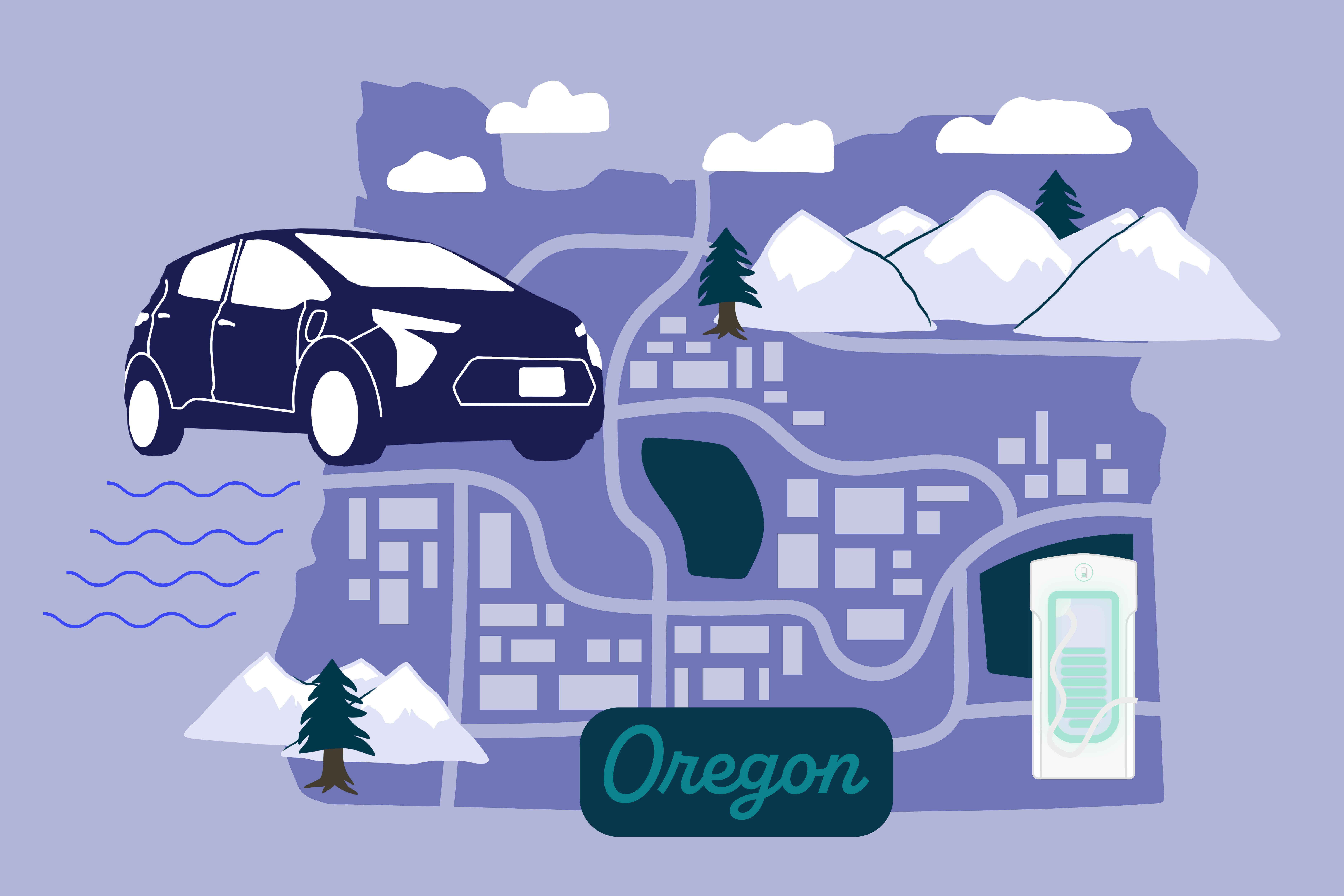 The effect of the COVID-19 pandemic on the market and supply chain prevented the state from reaching the first goal (as of October 2021, 43,478 ZEVs registered), but Oregon’s robust incentive programs show that the state is ready to get electric vehicles on the road. As of June 2022, Oregon is not one of the top-ten states in the nation in terms of EV registrations, but numbers are changing rapidly.

Data in the chart below comes from the US Department of Energy.

What incentives and programs does Oregon have to aid EV adoption?

Purchasing an electric vehicle is a major investment, but Oregon offers a variety of rebates and tax incentives to make it easier. Electric vehicle (EV) drivers can save $2,500-$7,500 on their new, used, or leased vehicle through the Oregon Clean Vehicle Rebate Program, depending on income and the vehicle’s battery size. Recent changes were made to this program in January 2022 to increase eligibility for low and moderate income households. Oregonians can also use the federal EV tax credit, for up to $7,500. In total, eligible shoppers buying eligible vehicles can save a whopping $15K off the purchase price of a new EV and $9K off a used one.

Many utilities in the region also have rebates available for EV drivers who install chargers in their home or have EVs registered to their account. These rebates range from $50-$1500. Check with your local utility to see which ones are available in your area. For example, PGE, the utility provider for 1.9 million people in the Portland and Salem metro areas, offers a $500 rebate for customers that install a Level 2 charger. There is a larger rebate, up to $1,000 for customers who earn 80% or less of the median income for their area. Tesla drivers can also enroll for a rewards program. For charging around town, PGE has incentives for commercial and office buildings to install chargers for employee use.

Lastly, an EV will cost less to maintain and “fuel” over time. Oregon’s electric utility prices are 3 times cheaper than gasoline fuel. Maintenance for EVs is also much simpler and therefore cheaper than traditional internal combustion engine vehicles. There are fewer moving parts, no oil changes, and the regenerative braking feature of EVs (charges battery while braking) leads to less frequent brake pad changes.

Mild temperatures are optimal for EV battery performance and longevity. Li-ion batteries perform best between 60°F/15°C and 95°F/35°C. In extreme cold, battery performance is reduced due to slower ion transport. This can temporarily reduce available power (limited acceleration) and available energy (vehicle range). At extreme high temperatures, material degradation takes place, which causes permanent capacity loss. Vehicles that spend an extended amount of time in high temperatures will need battery replacements sooner. It is also worth noting that at hot and cold temperature extremes, drivers will be using climate control. The vehicle heating and air conditioning is also powered by the battery on-board, limiting the range for that trip.

Oregon’s climate varies across the state, but vehicle owners in more temperate areas, such as in the Willamette and Columbia Valley, should experience fewer temperature-related effects. These regions are also ideal because of the flatter terrain. The high power loads required on steep mountain roads can also affect the lifetime of the vehicle battery.

With the help of federal funding and programs such as Electrify America, Oregon has invested in charging stations and infrastructure across the state. Oregon currently has 1 charging station for every 20 EVs. Recently, as a result of the federal infrastructure bill, Oregon’s Department of Transportation will receive $52 million over five years for EV charging infrastructure. It is expected that these funds will be prioritized for highways that are part of Alternative Fuels Corridors. In Oregon, these corridors include I-5, I-84, I-82, and US Highways 26, 101, 20 & 97.

Simultaneously, the state is introducing policies to improve infrastructure. For example, building codes will require that parking structures throughout the state include charging infrastructure by October of 2022. In order to lead by example, all state buildings and offices are installing EV chargers as well.

In the map below, you can see that most public chargers are centered around the major highways going up the westerm side of the state.

Is Oregon a good place to buy a used EV?

There is a lot of momentum behind electric vehicles in Oregon, especially as a result of the state’s ambitious EV and PHEV targets. In 2019, electric vehicles made up 3.32% of all vehicle sales in Oregon, the 4th highest percentage in the US after California, D.C., and Washington.  While most of the EVs on the market are new, used vehicles are up and coming.

Currently, Oregon has the 13th highest inventory of used EVs in the country, with over 2% of the national market. States with the highest used inventory are below, with data from Marketcheck as of January 28, 2022.

As of December 2022, the average price of a used EV in Oregon is $40,698.17, having fallen around $4,000 over the course of the year. Below are the states with the highest used EV inventory, along with their average listing price.

The lowest price used EV for sale in Oregon is a 2013 Nissan LEAF for just under $6K. While this vehicle likely won’t get a ton of miles, it could be a great starter EV for someone who has to do local errands or get to and from school. On the other hand, the highest priced used EV in the state is a $150K 2021 Model S - likely a performance model, based on the price point.

There are 36 different used electric vehicles available for under $20,000 in Oregon - that’s more than 10% of the inventory. These include LEAFs, older Chevy Volts, some Fiat 500e’s, Ford Fusion Energi’s, and some 2014 BMW i3’s. Again, the range will be limited on many of these models since they are older and have smaller battery packs, but they can be very sufficient as a second car or a first car for a teen driver. There are also great bargains on hybrids, which can typically run entirely on electric for local trips, but have an optional range extended that is powered by gasoline.

If you look at vehicles under $30,000, there are certainly more to choose from: 124 vehicles in total. This widens the inventory to newer versions of many of the same models. However, these newer models come with much better range and newer batteries, such as 150 miles + on a 2019 LEAF or BMW i3. Between $30K and $40K, you see some Pacifica Hybrids and a few older Tesla Model S’s, as well as the newest used model years mentioned above. But, most of the inventory is priced between $30 and $45K. In fact, there are only 98 vehicles listed above $50K - Teslas, Audis, BMW Hybrids, and the new Mustang Mach-E.

Oregon’s used inventory is unusual because there are so many 2018 models listed - in many states, there is much higher inventory in newer model years. Overall, 2019 is an important year when looking for used EVs, since average range jumps.

When we originally wrote this article, Oregon was also unique because the most popular used model is the LEAF, followed by the national favorite, the Model 3. However, as of December 2022, the Model 3 is the top car in inventory, like it is in most states across the country.

Recurrent tracks 377 electric vehicles in Oregon. Of these, 355 are fully electric (BEV, or battery electric vehicles) and 22 are plug-in hybrids. Each day, most of our all-electric drivers go between 12 and 40 miles, which is well within range for all used EVs on the road. In fact, the average range that we predict for our Oregon BEVs is 226 miles on a full charge, out of 243 miles original EPA rated range. This means that our average Oregon EV retains 93% of the original range as per the EPA.

Most of the cars that Recurrent tracks are Teslas, which have a higher average mile per day than other all-electrics. The Pacifica Hybrid is the only car that drives more per day.

We can also look at the breakdown of Recurrent vehicles per model year.

Since so many of the vehicles in the Recurrent fleet are Teslas, we can also see how the data changes if we exclude them. This leaves us with 177 vehicles across Oregon, with 155 being battery electric and 22 being plug-in hybrids. The average miles per day driven drops to between 8 and 38 miles, and the average percent of original range retained is 88%. The average  EPA range for the non-Tesla vehicles in our fleet is 181 miles, and the current predicted range is 159.

When you exclude the Teslas, there is a much higher percentage of vehicles from 2019 and later, as well (60%).