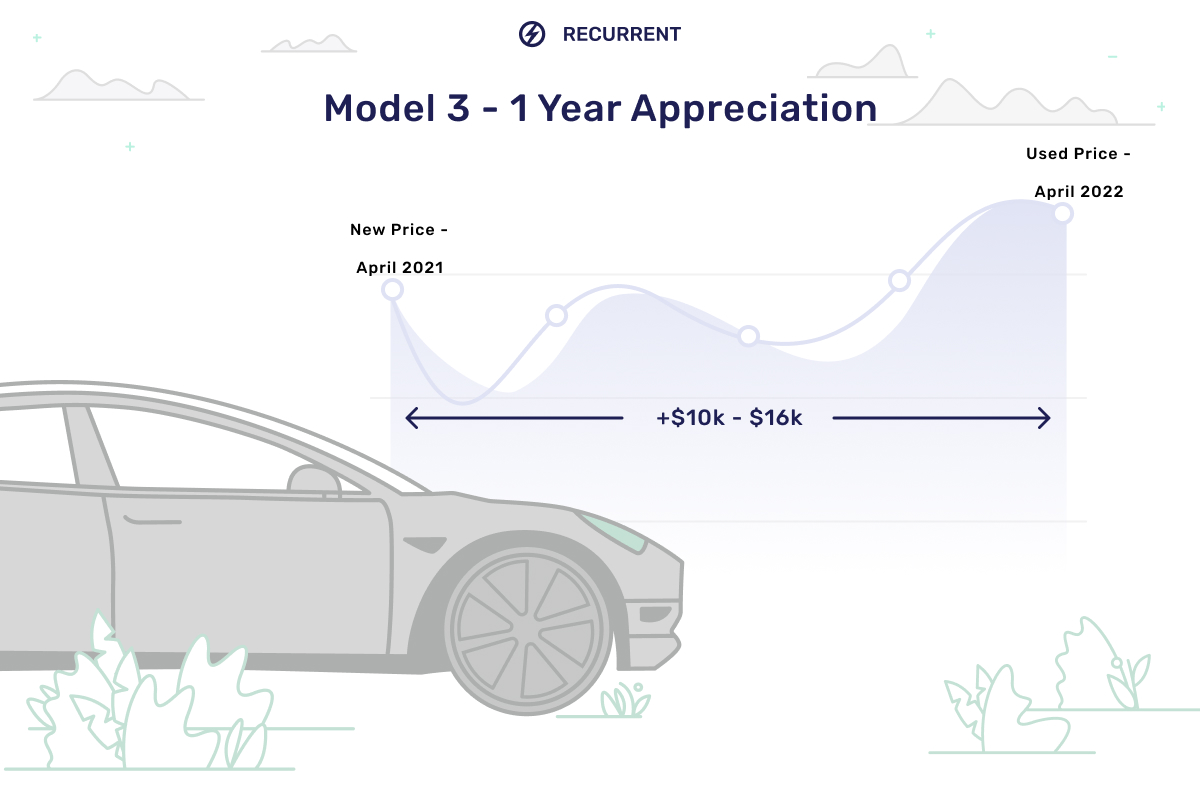 The rise of used EVs

Bloomberg recently reported that the US has hit a tipping point in EV sales by reaching 5% of new car sales. With unstable and high gas prices, plus talks about inflation and recession, Recurrent is seeing record levels of interest in used EVs, making our theme for this quarter the clear and quantifiable maturation of the used EV market. Car buyer interest in used EVs is relatively new. In the summer of 2021, Recurrent surveys found that just over 50% of EV shoppers would be interested in purchasing a used electric car while, a year later in the summer of 2022, an updated survey put that number closer to 80%.

As the demand for used electric cars grows, an interesting trend has been the rise of "car flipping," which we've also called "new used cars." This is the practice of reselling barely used, in-demand vehicles at a profit. This is happening particularly with EVs that have long wait lists or pre-order lines.

In 2021, it was pretty hard to get ahold of a new EV. The supply chain concerns were not resolved, and long waitlists for popular EV models left many new car shoppers looking at the second hand market. These shoppers were willing to pay for a new EV, so their price point tended to be higher than other used car shoppers. This trend in particular drives up demand for used cars in “like new” condition – and shoots up prices across the board. You can see in our used EV pricing chart below, the highest increase over the summer was for a 2022 Ford Mustang Mach-E.

Because new cars have been so hard to get, there has been new pressure on the used car market to supply EVs – the newer, the better. Normally, you would expect the used market to be predominantly models that are 3-4 years old, meaning that 2018 and 2019 models should be the bulk of what’s for sale.

Starting late last year, 2021 model year owners found that they could resell their relatively new EV for much more than they paid, “flipping” their car in the same way people flip houses. People who are savvy at predicting market trends bought up new vehicles then resold them with barely any miles. The first new-car buyers get the tax incentives and financing deals, but the second-hand shoppers get the car today, ahead of the long waitlists. This practice became so popular this past winter that in some months, there were more 2021 models in the used market than 2019’s, and a growing percentage of 2022 model years in used inventory.

Tesla is an interesting example because the price of a new model has increased so much last year that it created built-in inflation in used prices. Add extremely long waiting periods for new vehicles, and the value of used cars skyrocketed. For example, the MSRP for a base trim Tesla Model 3 in April 2021 was $39,000. If you were lucky enough to have bought one back then, you would have seen the value of your car appreciate between $10,000 and $16,000 in one year, with a $19,000 increase as of July 2022.

For further evidence that car flippers are having a great year, look at actual selling prices for the Rivian R1T Launch Edition below. As a reminder, the MSRP for the Launch Edition was between $73,000 and $95,000, depending on when you reserved it and its add-ons.

However, it seems like car manufacturers are getting wise to this practice and are cracking down. Ford has a one-year “no resale” clause on its F-150 Lightning, supposedly prompted by their dealerships. Similarly, Tesla reserves the right to cancel any order that the carmaker believes will be resold. Both companies have also ended their lease buyout programs, although with Ford, it is just for electric cars.  Similarly, the forthcoming used EV tax credit limits the incentive to those vehicles that are at least two model years old.