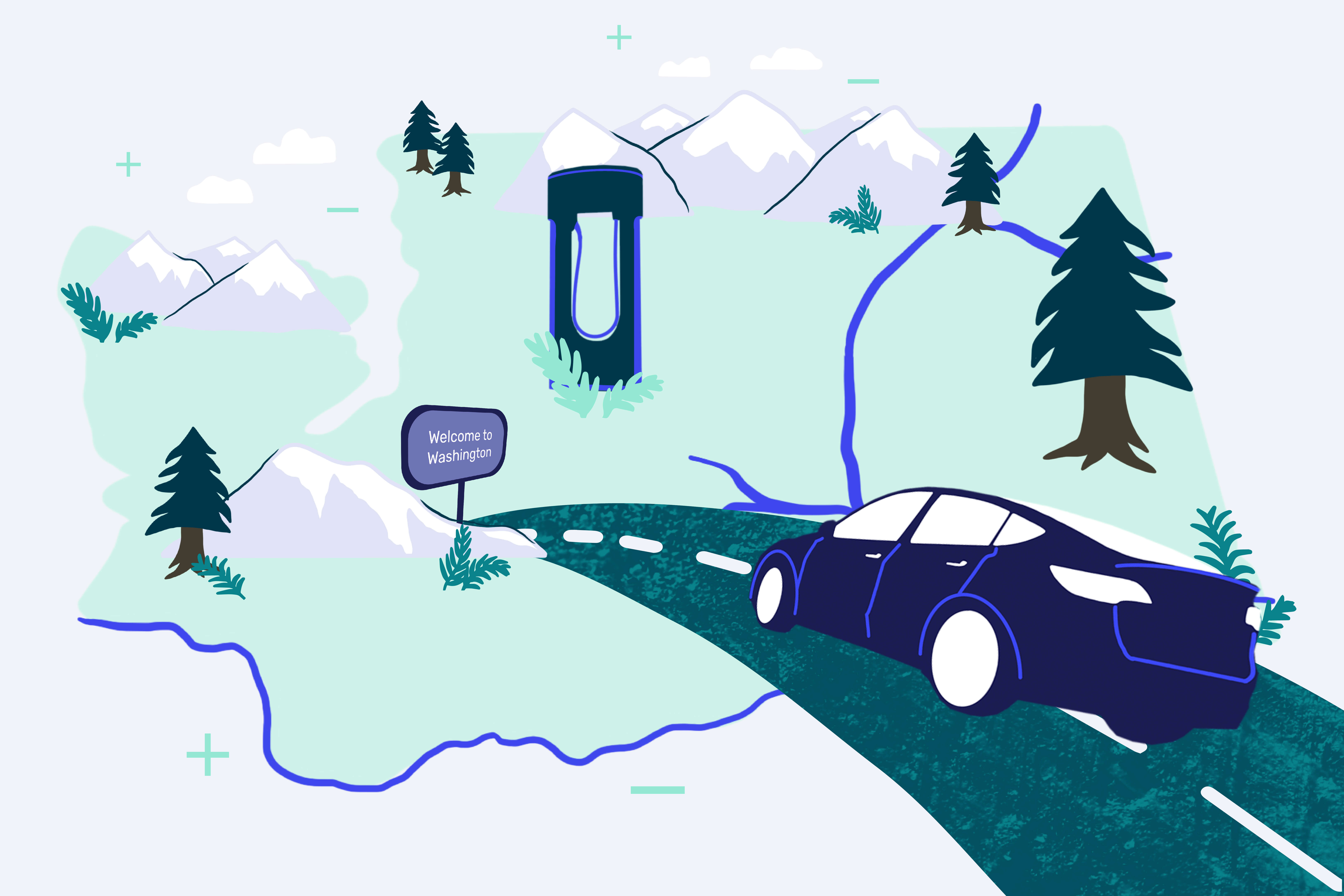 Electric car adoption in Washington is already amongst the highest in the country with registrations up to 17,140 as of November 2021. EVadoption.com puts cumulative EVs in the state between 2011 and September 2021 at 80,397 - fourth highest in the nation. Despite overturning a proposal to ban the sale of combustion cars by 2030, Washington State remains on the road to an all-electric future. After more than a decade of already strong emissions standards, in November 2021, Washington state adopted California’s zero-emissions standards, which require a percentage of all sales to be zero-emissions vehicles. By 2024, 8% of light duty vehicles must meet this criteria, with the quota expanding to medium and heavy duty trucks starting in 2025.

Although California leads the nation with total EVs registered, when you normalize the figures by population, Washington’s EV registrations are 6.5% to California’s 10.8%. The data below is from the US Department of Energy and is from June 2021.

What incentives and programs does Washington offer for EV shoppers?

In Washington, the purchase of cars, light-duty trucks, and medium-duty passenger vehicles that meet alternate fuel standards - like electric vehicles - qualify for up to $1300 of tax exemption. A new vehicle must be under $45,000 to qualify and a used one, $30,000. Tax exemptions extend to the purchase and installation of EV infrastructure such as home charging.

Also in late 2021, Washington Governor Jay Inslee made sweeping proposals to encourage EV adoption in a wider population, including a $7500 rebate for new EVs, $5,000 for used EVs, and an additional supplement of up to $5,000 for lower income buyers. These proposals have income caps and do not include luxury EVs. If passed, this program would be a landmark in several ways. First, it offers rebates, rather than year end tax credits, which makes EVs more accessible to shoppers who may not be able to wait for tax season. Secondly, rebates for used EVs are not yet that common and would lower the price discrepancy between used ICE and EVs significantly.

It’s worth mentioning that Washington State does charge an additional registration fee for EVs. The current fee is $150 for battery EV’s and $75 for plug in hybrids. These fees are meant to be around the same amount an average driver would pay in gas taxes each year, and go towards EV infrastructure such as public chargers.

How are Washington’s weather and terrain?

Lithium ion battery degradation is an unfortunate fact. A battery will lose some capacity and power with time even if it’s not used, but external factors such as temperature and charging behaviour greatly affect the rate of degradation. In terms of an EV battery, driving style and terrain will also have an effect on longevity. The basic rules of thumb are that batteries like the same temperatures that people do: around 75 degrees. When it’s very cold, a driver will experience short term range loss, but no damage to the battery. When it’s very hot, however, an EV will have both short term range loss and potential long term damage.

Washington State has seen temperatures range from 118 degrees F in 1961 to -48 degrees F in 1968, but statewide averages tend to hover between 84 and 20 degrees F - neither of which is too far outside the range of EV comfort. Luckily, the highest population density in Washington state happens to be in a fairly temperate climate along the western edge. If you’re in a part of the state that sees very hot weather, it’s a good idea to keep your car out of direct sun in the summer and in a garage if possible. In terms of winter lows, there is no long term concern, but be aware that you might get less range and charge more slowly. You can read more about the effects of temperature on battery health.

Terrain and road conditions also affect short term EV efficiency. Like with an ICE car, you will need more energy to get up a mountain, but unlike with an ICE, an EV will be most efficient for city driving, rather than cruising on a highway. Not only does the stop and go traffic capitalize on regenerative braking, but lower speeds are more efficient and will give you more range. So, if your EV use includes a lot of mountain outings or highway trips, just be aware that you may get fewer miles than you expect.

Another reason Washington is a great place to own an EV because electricity is cheaper and cleaner compared to many other places in the country. It has the fourth lowest electricity rate in the country in part thanks to the low operating costs of hydroelectric. Around 77% of Washington’s electricity comes from hydropower.

The cost of electricity is even more attractive when you compare it to high gas prices in the state and along the West Coast. While the Institute for Energy Research ranks Washington among the lowest in electricity cost, it is usually among the four highest for gasoline cost.

Is the charging infrastructure in Washington good?

According to evadoption.com, there are 3,765 public charging ports in Washington State, with 80 Level 1, 2,985 Level 2, and 700 Level 3 (DC Fast Chargers). Most of the public chargers in are in more densely populated areas, where EV owners are most likely to live in multi-family homes without easy access to home charging. The Alternative Fuels Data Center shows where all charging ports are in the state. Since 2016, the number of chargers has grown 133%.

Is Washington a good place to buy a used EV?

While Washington State is a leader in EV ownership, it trails other states in terms of current used EV inventory. Anecdotally, Recurrent has heard from dealers that it is very hard to keep used EVs in stock since they are such a hot commodity. As of April 2022, there are only 279 used EVs in inventory across the state - a decrease of 55% since January 2022.

Across the state, the lowest priced used EV is a 2013 Nissan LEAF for $5999. While a LEAF from 2013 will not offer many miles, it is perfect for someone with a short commute and easy access to charging. Be sure to check the battery on such an early year used EV, though - and remember that mileage doesn’t tell the full story!

In terms of affordable used EVs, most of the inventory lost since January was in the budget price point. Washington state has around 35 vehicles under $25K, down from 150 vehicles in January. These include early model LEAFs, BMW i3s, Fiat 500e’s, and Ford C-Max. At a $25K price point, you add in some Chevy Bolts and Volts, and the Ford Fusion. If you can push your budget between $30K and $50K, there are over 100 models in your price range. More than half of the used models will be under $40K.

On the other side of the price spectrum, the maximum price for a used EV in Washington is $140,000 for a 2021 Tesla Model S. Given this price point, it’s safe to assume that this car has all sorts of performance upgrades, and is likely in great condition. Washington State has relatively few high priced used EVs, though, with only 78 vehicles above $70K.

In terms of model years, 2018s are the most popular, which is consistent with data from across the country. This is important because there is a big jump in average range in model year 2019. Washington is one of the few states that does not have a disproportionate number of 2021 models in inventory right now.

In terms of most popular models in Washington State Inventory, national trends are also reflected, although the LEAF and i3 are more popular than they are overall, and it's rare to see the Model S twice as popular as the Model 3 in inventory!

Recurrent tracks 705 EVs in Washington as a part of our research fleet: 650 battery electrics and 54 plug-in electrics. Most are used but there are a few current model year vehicles, too.

Here are some of the trends we’ve seen so far, restricted to only the full battery electric models. Note that we exclude the plug-ins for these calculations since the range estimates are so different.

The average daily mileage for Teslas is higher than for other models, so if you remove them from the calculations, the numbers change a bit:

If you are already an EV driver and curious about how your battery is doing, Recurrent can help!

‍Join us to get monthly battery reports delivered to your inbox.