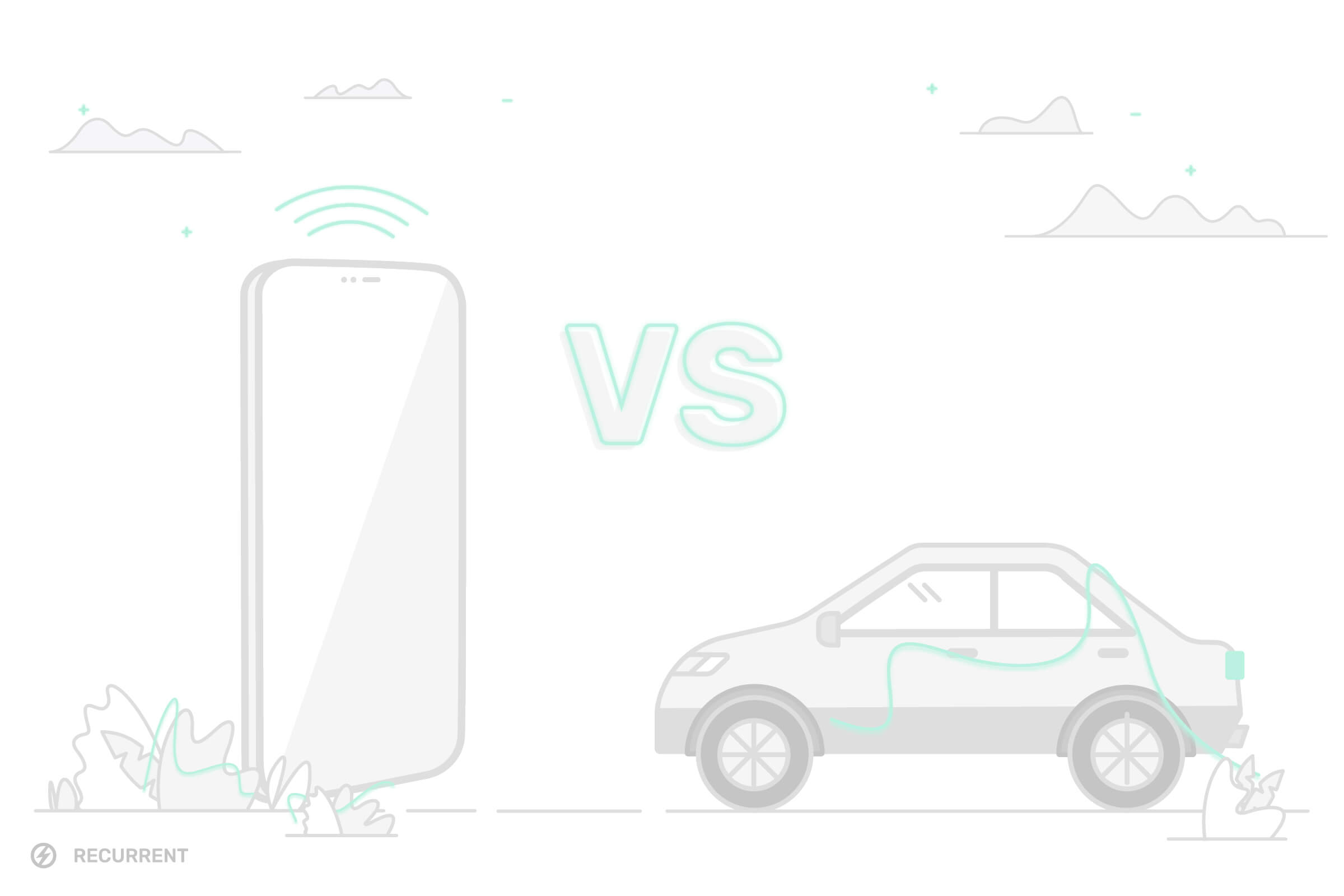 Why EV Batteries Last So Much Longer Than Cell Phone Batteries

I was out to dinner with friends the other night and someone asked a question about batteries. They called it a "silly question," but I think it's actually a really a good one. It's a particularly good question for anyone who owns an electric car or has ever considered owning one.

"Why do EV batteries last longer than cell phone batteries if they are both lithium ion?"

‍
If we take a step backward, it's worth reiterating that yes: it's true that cell phones and electric cars both use lithium ion batteries. But, while most of us find our cell phone batteries to be unusable after a few years, we're promised that the same sort of battery will last for a decade in a car.

I gave the person who asked this question some vague answers about how the battery management systems in cell phones must be more bare bones than in EVs, but I was unsatisfied with my response and went home to start researching. With help from the rest of the battery science team at Recurrent, here’s what I found.

If you have anything to add to this, please reach out to Recurrent or me.

First, let’s start with the very obvious: cell phone batteries are a single lithium ion battery cell, almost always 3.7V, whereas EVs have many cells in various parallel and/or series configurations. While the federal government mandates EV battery warranties last for at least 8 years or 100,000 miles, cell phone batteries do not have any mandated or informal longevity requirements. In fact, most people are comfortable with and expect to replace their entire cell phone every two years, if not whenever a new one is available. You don’t hear much about cell phone battery replacement - and for good reason. You might as well get a whole new phone.

In terms of physical design, cell phone batteries must be small and light in order to fit in the phone casing. This means that they are chemically optimized for capacity - you want the most energy you can cram into the small available space and you don’t have to worry (as much) about how quickly you burn through the battery. No one is expecting a cell phone battery to last eight years and no one doubts cellular or computational technology when there is evidence of capacity or power fade in your phone. Phone batteries are designed with size and weight in mind.

On the other hand, EV batteries can (and must) be much larger. With nascent EV technology, there is a lot of anxiety and suspicion about battery longevity, so long battery warranties are in place. If an EV battery dies prematurely, it is the financial responsibility of the car manufacturer to replace it at great cost to them. EV batteries are thus optimized for longevity in terms of physical and chemical design, rather than size or weight. The weight of an EV battery itself is less of a concern because an EV can recapture energy through regenerative braking, while a cell phone battery has no means to recoup lost electricity.

Here are a few other considerations about EV vs. cell phone batteries. They all really go back to design choices to favor either capacity (cell phones) or longevity (EVs).

The simplest reason that EV batteries last so much longer than cell phone batteries is that they don’t: we are just measuring battery lifetimes wrong.

The technical way to measure battery longevity is with cycle life: how many times the battery goes from 100% charge to 0% charge (or the equivalent of, since you’re not really supposed to hit either state of charge with a lithium ion battery).

Conventional wisdom is that a lithium battery has between 300-500 full cycles in it over its lifetime. If you don’t ever run a full cycle but limit your depth of discharge, maybe you’ll get 700 - 1000 full cycle equivalents. In battery science, the battery lifetime is usually when the capacity goes down to 80% of original, but for EVs it is whenever the warranty kicks in (often below 70% original capacity). For cell phones, the lifetime of the battery effectively means when you can’t really use your phone anymore.

How many times a day does your cell phone battery get low enough that you plug it in? When my phone was new, I charged it once a day whether or not I had used the full battery, so we can assume (conservatively) that I went through 200 full cycles that year. A year into owning my S10+, I charge at least twice per 24 hours, meaning that in a year, I am running at least 728 cycles. In these two years, it’s been nearly 1,000 full cycles of my cell phone battery -  certainly enough to see noticeable and meaningful changes in the battery capacity.

Let’s look at an EV. Assuming that the average American driver uses around 30 miles a day, six days a week, and an EV gets 200 miles per charge, you’re talking about one full battery cycle a week. Even if you charge more frequently, you’re really only using up the battery capacity once a week. In this case, you’re going through 50 - 60 cycles a year, which gives you around 8 - 10 years until you hit 500 cycles. You’d need to operate the car for 20 years to hit 1000 full cycles, which is what you’re doing to your cell phone battery in only two years.

EVs control the depth of discharge in a clever way: they oversize their batteries so that the driver doesn’t have access to the full capacity while the battery is still new. About 5% of capacity is held out from the top end of the battery charge, and about 15% on the lower end (although exact numbers vary with manufacturer). This means that when the battery shows 100% charged, only 95% of the physical battery is charged up - the other percentage is held in reserve, hidden from the driver, to protect and prolong the battery life. Ditto on the lower end of the battery charge. As the battery ages, more of the reserve battery is used, to give the illusion of constant battery capacity. This both builds consumer confidence in the longevity of lithium ion tech, and makes the battery last longer.

In a cell phone battery, the manufacturers don’t want any extra battery, which adds weight and bulk. So, almost all of the physical battery is usable and almost no buffer is held in reserve. People are also more cavalier about using more of their battery percentage and this increased depth of discharge takes a toll on the battery life. You are less likely to get stranded on the side of the highway if your cell phone is at 1% than if your EV battery is.

One thing that we know for sure is that temperature affects battery life a lot. Hot temperatures - especially sustained ones - are bad for lithium batteries. It’s part of why early LEAFs did so poorly in Arizona, and why you shouldn’t leave your laptop in a hot car. Extremely cold temperatures are also bad for batteries usage, but don't cause long term damage.

In an EV, there is a lot of hardware, software, and computational power that goes to ensuring the battery is at the proper temperature. It’s worth building out liquid cooling and fans to protect a $10,000 piece of equipment. However, in a cell phone, there is little space for active thermal management (fans, cooling systems) and little incentive to protect the battery as an independent component. Cell phones rely on materials, not systems, to help cool the battery and dissipate heat.

Much like how batteries hate extreme temperatures, they also fear voltage extremes, which often physically stress the battery and degrade performance in a similar way as temperature. Again, the battery management system in an EV restricts the high and low ends of a battery charge so that the battery never sees extreme voltages. In a cell phone, however, the battery is optimized for capacity, not longevity. Most of the voltage management in your cell phone goes to protecting the computer parts, not the battery itself. This means that your cell phone battery is in risky voltage zones frequently - as much as daily if you’re going from a full charge to empty.

So, it comes down to this: cell phone batteries are not built to last a long time, and we don’t treat them as precious or delicate things. We expect to replace our phones (and their batteries) with regularity. We run our phones through full battery cycles almost daily and they often wind up exposed to high voltage. EV’s, on the other hand, are designed with a lot of software and hardware to protect the battery and ensure that it retains capacity as long as possible. EV drivers are also very aware of the high cost of replacement so are more likely to follow best practices. The lithium ion technology in both batteries is similar: it’s how they are used that differs.

If you have any other thoughts about why cell phone batteries degrade so much more quickly than EV batteries, let us know. Or, ask us an interesting question and have us do the research for you!