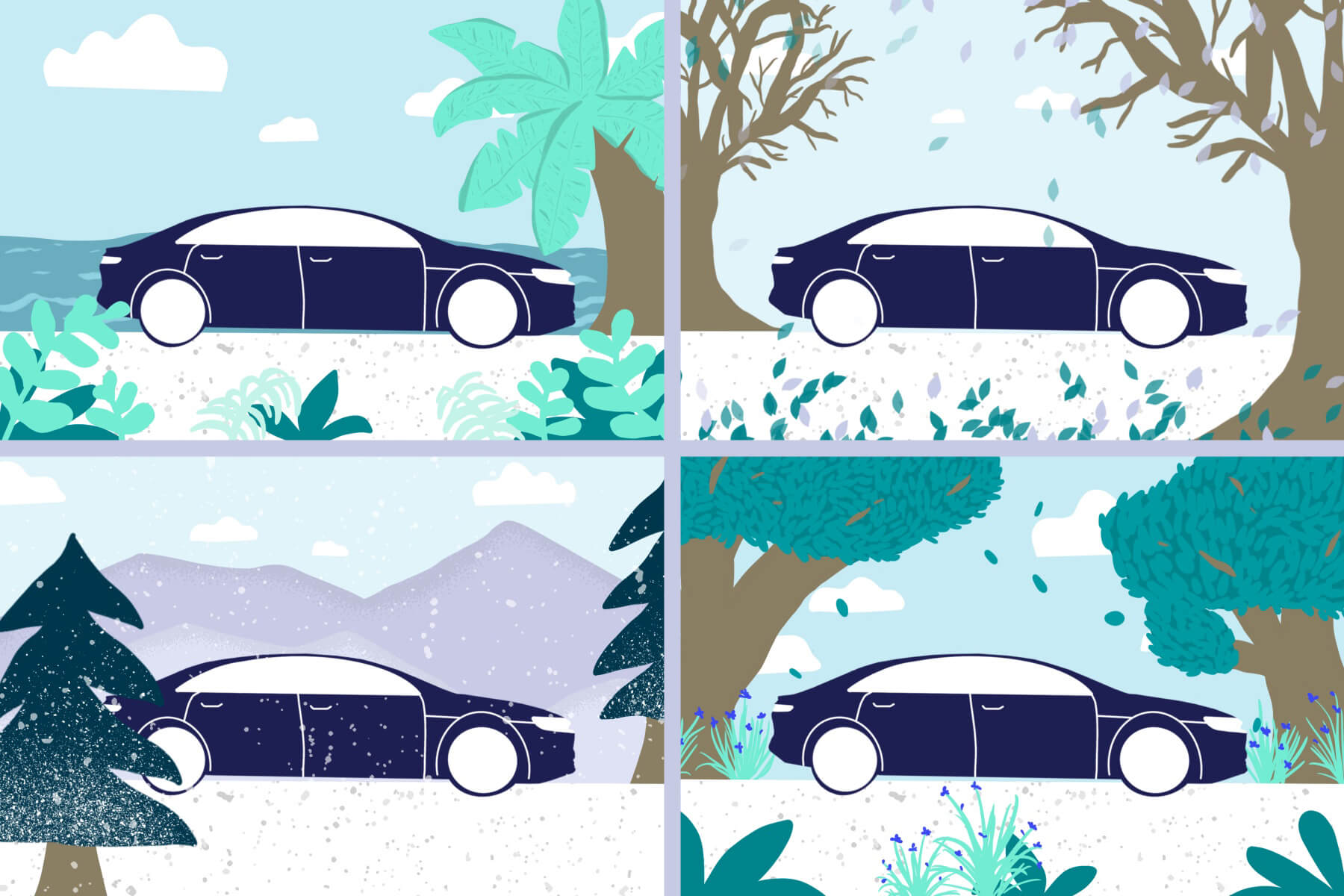 “Why does my range drop when it’s cold?” is one of the most common questions we hear.

While some drivers fear frigid winters and others must navigate fiery summers, nearly all EV owners have questioned the effect of temperature on their vehicles. This article is designed for a general audience, but we want to include some advanced battery bits for our more technical readers.

If you're looking for a broad intro to electric vehicles, consider signing up for our EV 101 emails, or check out vehicle-specific battery guides for Tesla Model 3 and Chevrolet Bolt.

What does cold weather do to EV range?

Cold weather temporarily reduces EV battery range. While some of this is due to science, and the fact that the cold slows down chemical reactions,  most of it seems to be a result of climate control in EVs. AAA tested the range effects of 20F degree weather on several popular EVs and found that temperature alone could reduce range by 10-12%, while the use of in-vehicle climate control could amplify range loss to 40%. Idaho National Labs reported that cold weather can increase charging times by almost threefold, as seen in this chart by AutoBlog.

In winter of 2022/23, Recurrent updated our own cold weather range data with all new, verified data for some of the 13 models below:

Since there is a lot of misinformation about EVs and cold weather, check out our article on winter idling and how your EV will not leave you stranded in a cold weather traffic jam. We also share our own data on winter range loss and give tips to preserve range with preconditioning.

While the science in this article applies to all EV batteries, we have to call out Teslas as a special case. While their batteries are not immune to temperature effects, Tesla controls these effects very tightly and often does not make them obvious to the driver, i.e. the dashboard range often does not reflect temperature effects. Tesla does this in two ways. First, they use a robust thermal management system to keep the battery within a healthy operational temperature range, warming it in the winter and cooling it in the summer. The second thing that Tesla does is calculate its on-board range by using a fixed efficiency value, rather than using a dynamic value based on external factors. That means that Tesla range estimates often look the same in any temperature, even though Tesla drivers know they can change quite a bit.

Why does the cold affect lithium ion batteries?

Even though cold-related range effects are temporary, your battery should be above freezing before charging. Most vehicles do have some sort of temperature regulation in their battery management system (BMS) that will prevent high voltage or fast charging if the battery is too cold. In general, if your vehicle is turned on or plugged in, energy will be drawn to keep the temperature in a healthy range. The two outliers for this are Nissan Leaf, which only has thermal regulation kick on when the temperature is below -20C (-4F), and Tesla, which will activate thermal management even if the vehicle is off or not plugged in. Tesla's temperature regulation protects your battery health, but can also cost you some range if the car is heating the battery while not plugged in.

Please note that the section below describes the physical processes that scientists have observed in individual lithium ion cells. Contemporary electric vehicles have battery management systems that should prevent this sort of long-term damage to your battery. If in doubt, avoid supercharging or high voltage charging when your battery is below freezing. Many vehicles also allow you to precondition your battery for charging by using the in-vehicle navigation system to go to a charger.

Lithium plating is a metallic build up at the negative battery node (the anode, where the energy goes during charging). In short, cold weather makes ions flow through  battery cells more slowly, causing lithium to build up outside the node and turn into an inert metal. This metal disrupts the future flow of energy and uses up some of the lithium that is supposed to power the battery. In single cell observations, this can lead to a decrease in power and range.

If you’re interested in a little more detail: battery anodes are made of materials, like graphite, that have lattice-like structures. This is important because when a battery charges, lithium ions move from the cathode into the anode and are stored in this grid-like structure. This process is called intercalation. Force (in this case, current) is needed to push the ions into the anode and lodge them in the grid. If this process happens when it is cold out, the ions enter the anode more slowly and the build up of lithium outside can form a metallic plating. Some of these ions will gradually enter the anode over time, but some will remain plated outside, permanently reducing capacity and increasing internal battery resistance.

Remember: your car’s computer systems should pre-heat your battery and slow the charge until it is safe to charge normally. On the other hand, even when it’s very cold, you can use an already charged lithium ion battery worry-free. You’ll notice short term reduced range since the cold weather inhibits ion flow, but there is likely no long term damage.

What does heat do to my EV battery?

Temperature is known to have a big influence on the rate of Li battery degradation. One of the main reasons that it is so critical is because temperature affects the rate and efficiency of chemical reactions inside a battery. Higher temperature means there is more total energy in a system, so it leads to faster reactions across the board. This means that all reactions happen faster in high heat - both the ones that produce energy, and the  “unwanted” chemical reactions that make batteries degrade.

If you want to get into the nerdy specifics, high temperatures increase the rate of reactions in the Solid Electrolyte Interphase (SEI) - a layer of inactive lithium that forms on the anode surface. The SEI is made up of lithium salts that react with the electrolyte solvent and become inert. It is permeable to the lithium ions that make the battery work but impermeable to the electrolyte, so it serves as a protective barrier between the anode and electrolyte. To clarify: this layer is not the same as lithium plating: while it does use up some of the lithium available to power the battery, it also makes the electrolyte stable and helps protect the anode from corrosion.

The problem is that high heat can affect the composition and organization of the protective SEI layer, triggering reactions that use up too much active lithium or creating inert compounds that prevent ions from flowing freely. It's all a matter of degree - some SEI is necessary to protect the battery and ensure long-term, stable use. Too many reactions in the SEI pull too much lithium away from producing energy and can prevent ions from moving around in the battery.

The exact way that the heat degradation mechanism works is different for batteries at rest, batteries charging, and batteries being cycled. The heat effects also differ between specific battery chemistries. In most cases, though, higher temps will lead to faster degradation.

What happens when I store my EV in the heat?

The physical reason that heat causes faster degradation is because ions and other battery particles move through this layer via diffusion, the speed of which is directly correlated to temperature. Heat increases the rate of chemical reactions so much, secondary reactions may also occur at high temperatures, creating new inert compounds and increasing impedance, according to studies by Vetter et al.

What happens when I charge my EV in the heat?

High temperatures can damage batteries during charging. High temperatures increase the effective force of the electric current that drives lithium ions from one node of the battery to the other, causing physical stress and damage on the receiving end. The higher the temperature - or the higher the current - the more stress fractures and damage the battery node experiences. All these little fissures and cracks become surfaces for secondary reactions, using up available lithium and creating compounds that hinder the free flow of energy.

Again, we can be a little more technical for those who are curious. Intercalation, discussed above, is necessary to make a lithium ion battery work, but does cause physical stress to anode. When you charge at higher temperatures, the lithium ions intercalate more forcefully, often generating small cracks and fissures. This creates new surfaces for chemical reactions between the anode and the available lithium, mainly new areas for extra SEI growth. Any additional reactions use up lithium and lead to capacity fade. Additionally, if all the ions can’t find storage within the anode grid, they may get stuck outside the anode and undergo chemical reactions that create inert substances, including lithium plating. Both of these effects can increase the internal resistance of the battery and lower its available power.
‍