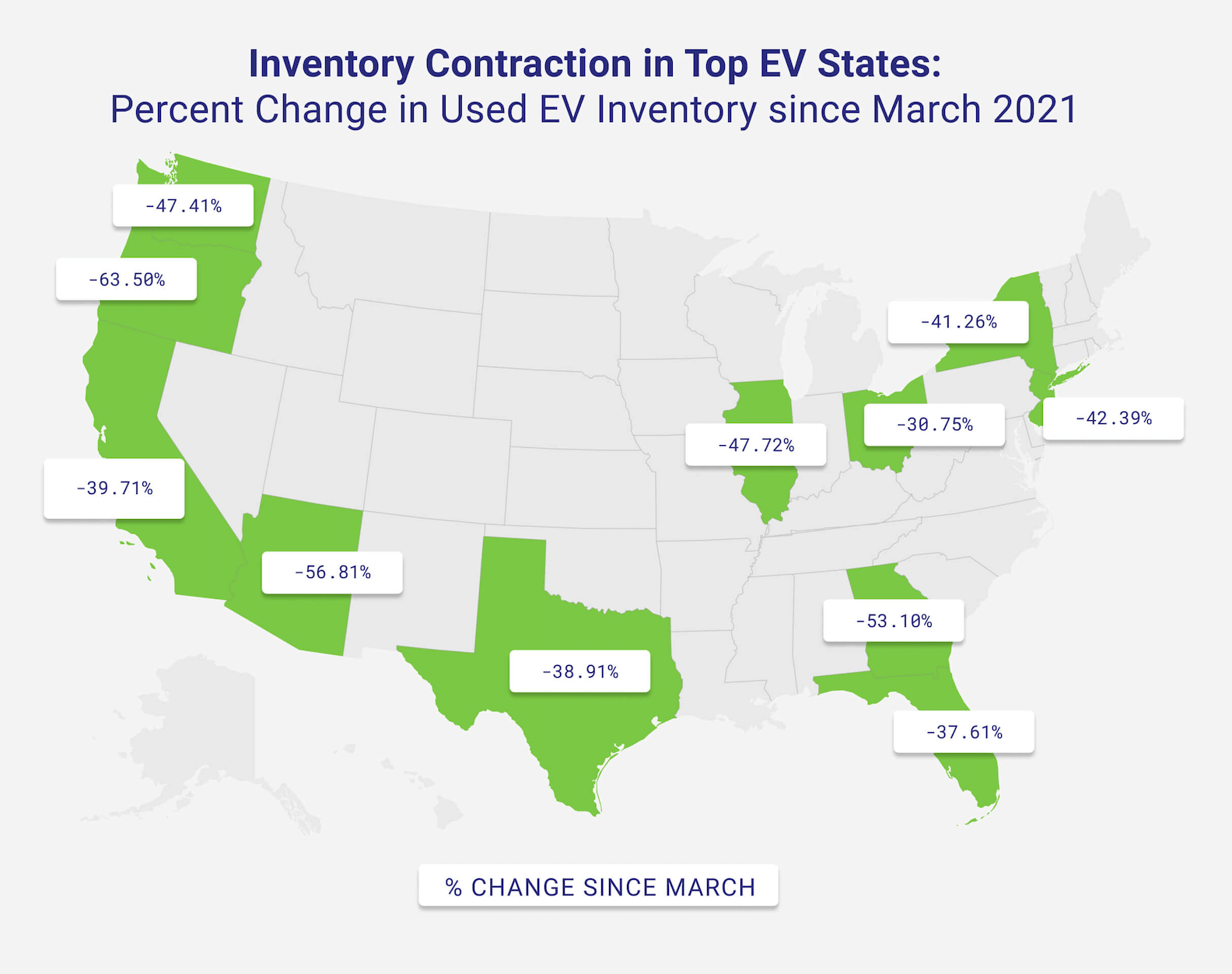 This month we cover several new topics in the booming used EV market. The September 2021 report:

In July, both Recurrent sales data and national analyses suggested that used car prices were starting to level off. The past two months of price data is further evidence that the market has stabilized. For used EVs, we saw a 2.32% price increase in from July to August, and a 0.39% increase going into September. Meanwhile, the overall used car price index saw a decline of 1.5% from August to September, meaning that used EVs pricing outpaced the used combustion engine market. We will continue to track this trend after this year of anomalous pricing.

Despite the used car market leveling off, the ongoing semiconductor shortage is still affecting US automakers. Last week, GM announced that most US production would pause after Labor Day, and many other auto manufacturers foresee temporary layoffs and production slow downs. This suggests that although used EV prices may have stabilized, they will not go back down to pre-summer levels anytime soon. An EV can require ten times more semiconductors than an ICE car, so expect electric inventory to remain limited as buyers looking for new EVs compete with buyers in the used markets.

Our methodology to calculate the used EV price index is to use a representative sample of popular vehicles and compare national averages for retail prices. The models we included in our bundle are: 2017 BMW i3, Chevy Bolt, Tesla Model S; 2018 BMW 530e, Honda Clarity, 2018 Nissan LEAF; 2019 Audi e-tron, Tesla Model 3, VW e-Golf.

Looking for your first electric car? Check out by our free e-book on EV range.

In March, Recurrent released its first used EV buying guide to highlight the growth of the market and report on trends that were not being covered by other automotive sources. Six months later, we have seen meteoric price increases, drastic inventory contractions, and a shift in what model years are most popular in inventory.

As of September 2021, over 48% of all used EVs in the US are under $25,000 and nearly 30% are under $20,000. The $20-$25K price range is the target for auto manufacturers looking to produce a mass market EV to win over everyday, budget-conscious drivers, as rumors of a Tesla Model 2 or Volkswagen ID.2 suggest. New EVs available for around $25K will inject the used market with a supply of reliable electric cars priced around $10-$15K in a few years, and attract new drivers to the electric market.

Looking for your first electric car? Check out by the best options under $20k.

As reported in March, there had been an almost 50% increase in used EV inventory since summer 2020. However, since that report, the inventory number has dropped 21% despite a modest increase in the last 2 months. Supply has dropped at least 35% in top EV states since March. Both Oregon and Virginia lost over 63% of their inventory in six months. The only state that remained near constant was Tennessee, losing only a handful of total inventory since March. These numbers are consistent with the overall used car market, which saw unprecedented low inventory this summer.

In part, it is due to the global semiconductor shortage, which is causing significant production delays in new cars. That has pushed shoppers to consider the used market. Since EVs require ten times the number of semiconductors as ICE cars, this is a strong effect in the used EV market.

Secondly, the market is still reeling from the pandemic: dealerships that initially scaled down their supply or offered deep discounts to move cars off their lots are now scrambling to replenish a fleeting inventory that is not being filled by rental car sellers or fleet vehicle turnover.

We can expect inventory to remain very tight through the end of 2021.

Looking for affordable EVs in your state? Here's an article for you!

About This Monthly Report

We partner with Marketcheck, a vehicle inventory data provider, to provide this insight into the pre-owned EV market. Our analysis is updated each month.

The electric vehicle market moves quickly and, lately, news hits every day. Tons of car manufacturers are getting in the EV game and new battery technologies are on the horizon. This means that while you may want to get in on electric, maybe you’re hesitant to lay out cash for a new car right now. On the other hand, the used EV market offers affordability and accessibility, and is a good place to make the switch to electric at a low upfront cost.

What Else Should I Know About Used EVs?

The short answer is lots, especially as electric cars age and we learn about the effects of miles, temperatures and battery cycles on each model. If you’re an EV driver and you’d like to see how your car’s battery compares to others by joining our research fleet, sign up for our EV battery reports here.

If you are shopping for an electric car and want to verify its battery, try our new range report tool that recently became available to the public.

Each month we publish a new report with the latest industry data. Browse this section to review previous reports and their findings. Each image links to the full report!

Like many things, used EV prices vary from state to state. There isn’t a hard and fast rule about where EVs are more expensive, including the biggest EV states like California, but there is a very wide range in the prices for popular models state to state. It’s common to see a $5,000 spread between the least and most expensive states.

Drilling into the Used Tesla Market: Lots of Choices

Does the direct-to-consumer sales model hold for pre-owned Teslas? We found that only 7% of today’s used Tesla listings are on tesla.com.

Last month, we saw Teslas hold their place as the most common used EV on the market. However, the used stock of almost all EVs decreased through March - except for BMW. Perhaps it’s anticipation for the forthcoming i4, or delivery of new i3s, but there has been an increase in the availability of used 530e’s, 330e’s, and the X5 - xDrive40e. If you’ve been keeping your eye on one of these models, it may be a good time to check prices, as the average has dipped slightly in the past month. Used i3’s, on the other hand, continue to retain their value and even showed slight price increases, with 2018s being the best represented year in the market and 2017s at their heels.

One way to look at used EV prices is by comparing cost per range mile using EPA estimated range. One thing to keep in mind is that EPA range specifies how far your EV will go when the battery is new. EV batteries degrade based on age, how they have been driven, and how they have been stored. To really understand the value of an EV, it is critical to understand the battery in its current state, after several summers in the driveway or several hundred charging cycles.

Seasonality exists in used car sales and due to COVID-related economic changes, but this trend is real. Used car sales follow a predictable time delay, peaking at 3-4 years after being sold new. This pattern exists in electric vehicles as well: Six months ago, the most common model year for sale in used EVs was 2017 by far. Now, there are nearly as many 2018 model year used EVs for sale as 2017’s.

The Most Popular Used Electric Cars in March

How do older EV batteries hold up?

EV owners and shoppers perceive that EV batteries last just seven years (Cox Automotive study), but the reality is generally better. A lot of factors play into the battery life of each EV over its life, including manufacturing variances, pack layouts and cooling systems, calendar age, use, temperature history, charging behavior. In our data analysis of 1000’s of EVs on the road, we’ve found that odometer reading alone isn’t particularly helpful in understanding each vehicle’s battery life.