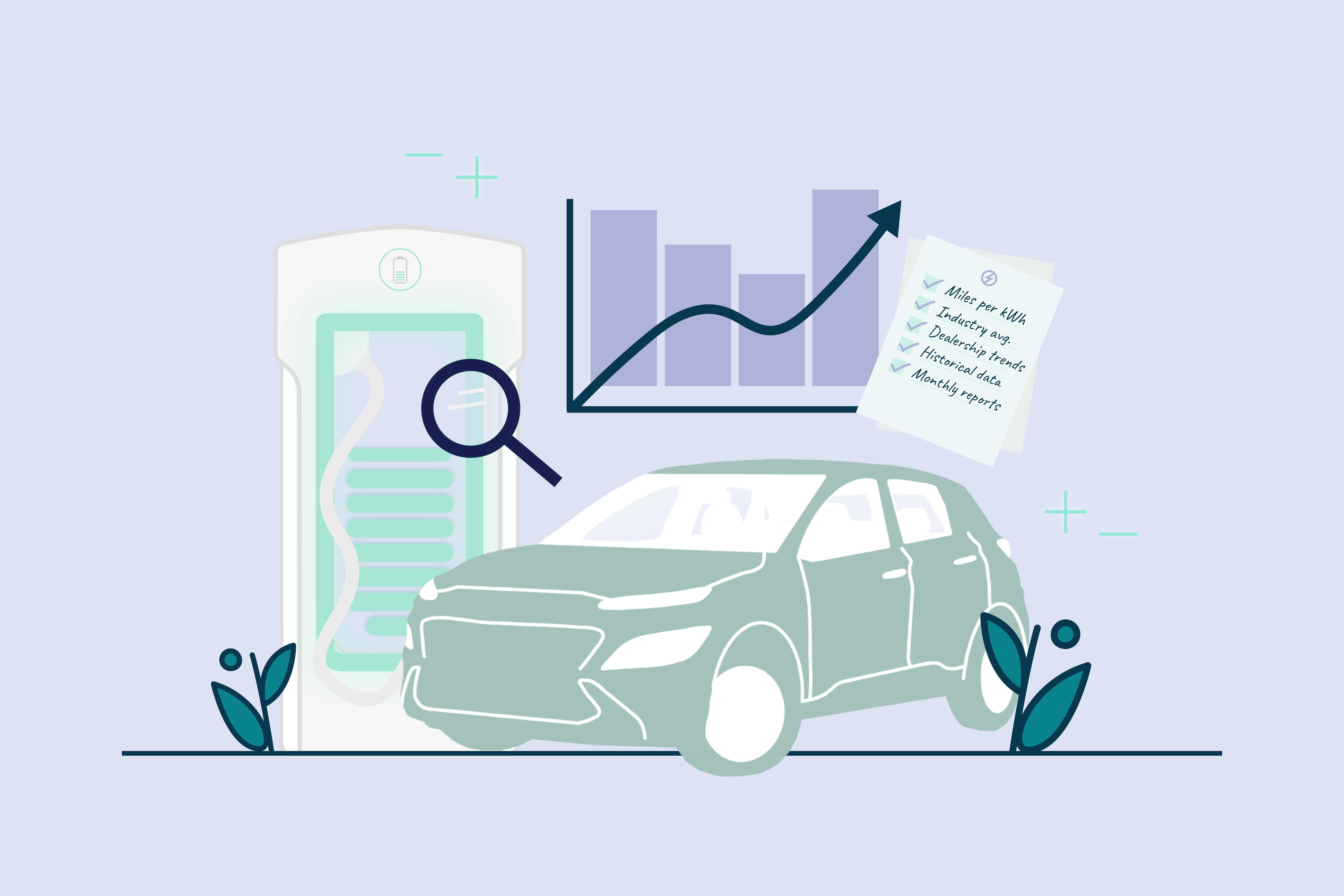 100 million is a lot. That’s how many miles Recurrent vehicles have driven since they connected to our services to monitor their EV performance and health. There are some optimistic, high level takeaways in all this data:

What is battery health?

Battery health is quite a hard concept to pin down. Intuitively, it means how well a battery can perform as compared to when it was new, but the exact way that is quantified depends on who you ask. In battery science literature, it is commonly referred to as “state of health,” or SoH.

One of the easier ways to talk about battery health is by comparing the original battery capacity, in kWh, to the current battery capacity. The change between the two would indicate some degree of capacity fade, or loss in total available energy that the battery can store. Battery capacity can be tested in a variety of ways, including extrapolations from “energy in” and “energy out” of packs.

A more subtle way to look at health is to look at power fade, or the internal resistance that may be degrading the battery performance. This happens when secondary, harmful chemical reactions occur in the battery and impede the free flow of energy in the battery Power fade tends to accompany capacity fade but is harder to diagnose and often requires laboratory and diagnostic testing.

True battery health is likely a combination of capacity and power fade, but for the driver of an EV, it translates to whether or not the car can accelerate as fast, and go as far, as when new.

How do EV batteries degrade?

First, it’s important to know how batteries work at a very high level. Batteries produce energy using both physical and chemical processes. In lithium batteries, lithium is the active material, and charged lithium particles, called ions, move back and forth between two nodes to generate electricity.

Batteries degrade in a few ways - some are normal and unavoidable, and some are due to the way they are used and stored. For instance, the baseline degradation that every battery experiences is due to age and is called “calendar aging.” It doesn’t matter whether or not the battery is even used - it will degrade with time even while sitting on a shelf.

How does this happen?

In addition to the chemical reactions that cause a battery to work, there are also inevitable secondary reactions that take place within the battery. These are normal, but you can take steps to minimize them.

While any battery will experience some degree of both capacity and power fade, there are certain things that can accelerate them. The chart below is estimated range observations for Tesla Model 3s in the Recurrent fleet. The range observations are plotted as a function of their odometer. It uses real-world, observed data from our fleet to show how as cars age, their estimated range falls.

Since battery degradation is a normal part of the battery life cycle, it’s happening all the time. From the second the battery is made, calendar aging kicks in. Unfortunately, no one can stop the passing of time, but there are some things you can do to prevent additional degradation.

The main things that accelerate battery degradation are things that cause the physical and chemical reactions to happen faster. The main culprits are heat and extreme state of charge. High voltage is another cause, but the degradation mechanism is usually related to high heat.

Heat - Heat is a form of energy, and when you add more energy to a system, chemical and physical reactions happen faster. In the case of a battery, heat causes secondary reactions to happen faster, and at a higher rate. While EV batteries have complex computer systems and thermal control to help protect from high temperatures, heat is still a concern.

Extreme State of Charge - batteries work because they turn chemical potential energy into electricity. However, that also means that the battery is inherently unstable when it is charged up. Similarly, when the battery is fully discharged, it can also be unstable. It is best to avoid a very high or very low state of charge, particularly if you will not be using the battery right away. Storing a lithium ion battery with a high charge can mean damage down the line.

Usage - Of course, the other factors on this list contribute much more to battery premature battery degradation, but it would be dishonest not to mention that any sort of usage also contributes to degradation. Moving lithium ions from one side of the battery to the other is a physically taxing process, and is an opportunity for secondary reactions to occur. However, that does not mean you shouldn’t use and enjoy your EV. EV batteries are built to handle normal usage, including daily use and long drives.

Car batteries are the same sort of battery as those found in your phone or laptop, but they are designed, built, and maintained so that they last. Some of this comes down to design choices meant to optimize lifetime in EV batteries, and some of it is due to the battery management system that cars have to protect from heat, high voltage, and extreme state of charge.

Read all about it!

Does battery health degrade in a straight line?

Battery health does not degrade in a straight line. When a new lithium ion battery is first used, there can be a short but dramatic decline in health right out of the gate. However, this is totally normal. This happens because some of the lithium salts in the battery react with the other materials to form a protective layer. This layer allows lithium ions to permeate, but is impermeable to other particles. In our observations, this first phase of degradation only lasts for the first 10-20,000 miles.

After this initial protective layer is built up, battery degradation levels off and decreases slowly and in a straight line. This is what EV owners and drivers will see for most of the car’s use. In a well functioning battery, degradation is limited and will be hard to detect over short periods of time. It can only be noticed over years.

Finally, as the battery nears the end of its life, it will have a sharp decline in capacity and performance. Most EV drivers will never see this, since the high voltage battery is considered “dead” when it is only around 70% empty! And, as a reminder, most EV drivers have not seen a battery degrade that far, since that is when most cars are eligible for a battery replacement. Very few modern EVs have been on the road long enough to reach this failure point.

How long do EV batteries last?

If you’ve been paying attention, it can seem like EV batteries are a ticking time bomb. However, they are actually quite robust and last longer than you’d expect - modern EV batteries are expected to outlast the lifetime of the car itself!

At a bare minimum, the federal government requires a warranty for at least 8 years or 100,000 miles for all EV batteries. Manufacturers don’t want to pay to replace such expensive components, so they work hard to meet that minimum.

We don’t know exactly how long the EV batteries on the road today will last because we haven’t seen many hit the end of life stage, yet. However, from observing the oldest models we can - Tesla Model S and Nissan LEAF - we see a range of outcomes. Early Nissan LEAFs had poor thermal management systems, so the first generation batteries often degraded enough to warrant a replacement. The lesson was that high heat absolutely impacts battery health. On the Tesla Model S, we see that many older models still get 80% of their original range, which is an indication that the batteries have held up quite well over the decade since they were released.

Can EV batteries be replaced?

EV batteries can absolutely be replaced. If there is something wrong with the battery construction or management system, it may need to be replaced while it is still under warranty. This replacement will be performed by an auto body shop that works with the car manufacturer or through a dealer. Some battery designers even make packs in which only faulty cells can be replaced, rather than the whole pack.

However, most healthy batteries will only need to be replaced after 15+ years of life. There are body shops who specialize in this work since special equipment and training is required.

How much is a battery replacement?

There are a lot of rumors about the prohibitive cost of battery replacement. While we have seen price quotes as high as $20,000, the majority of replacements happen under warranty. Depending on the car and the reason you need to have the battery replaced, it may cost more or less than this. If your battery is going to fail, the ideal is to catch it early and get it fixed under warranty.

Are there apps or tools to monitor EV battery health?

We’re glad you asked! There are many ways you can monitor your battery health, but Recurrent offers one of the least invasive solutions. While other options include hooking up a diagnostic tool to your car, or removing the battery for chemical testing, we use your vehicle’s telematic data to build machine learning models that predict your battery’s health today, as well as a prediction of what the range will be in three years. Whether you’re an EV owner, shopper, or a dealer, we can share insights about a vehicle’s range.