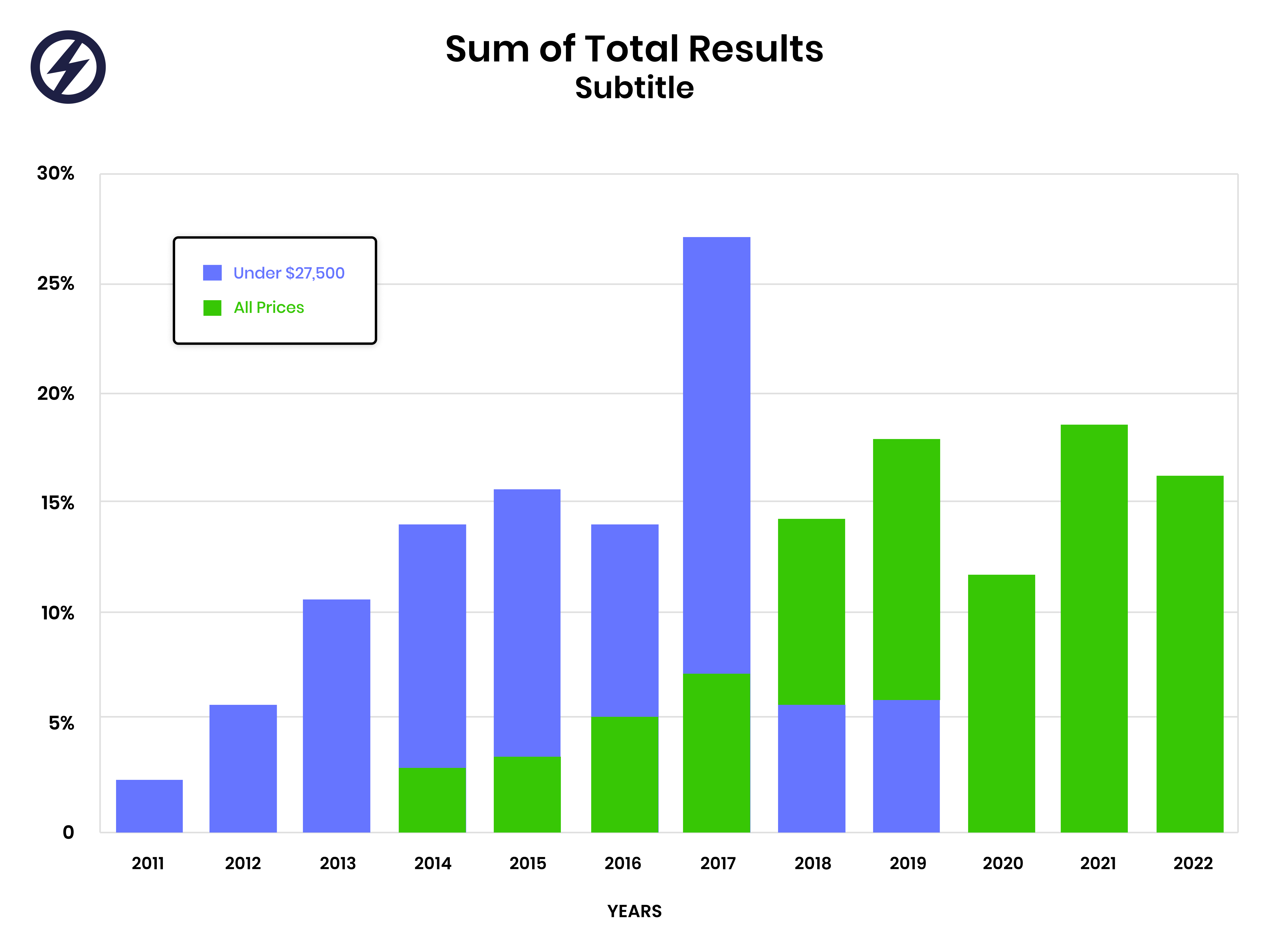 The Inflation Reduction Act of 2022, signed by President Biden on August 16, is a sweeping bill that adds prescription drug caps to the cost of medication for seniors, renews the affordable care act, imposes a minimum corporate tax, and reinvigorates incentives for and investment in clean energy. Estimates put the contribution of this Act at one billion tons of carbon avoided over the next ten years.

In addition to updates to the existing $7,500 new EV tax credit, the Inflation Reduction Act is the first tax credit for used EVs since federal EV incentives began in 2010. It offers a tax credit up to 30% of the purchase price of a qualifying used vehicle with a maximum credit of $4,000.

There are eligibility stipulations that need to be met for both the vehicle and the purchaser. While some of these are straightforward, others present situations that will affect how the used EV market grows and changes.

One of the simpler vehicle requirements is that the battery for propulsion must be at least 7 kWh. This is key because it allows virtually all the plug-in hybrids on the road today to qualify. Some popular examples include:

Just 12% of Used EVs Would Qualify for Tax Credit

The price cap for tax credit eligibility is $25,000. Only 17% of used EV sales from last quarter were under $25K and just 12% of inventory is currently listed below $25K.

Going into 2023, we expect that many vehicles on the cusp of the $25,000 eligibility level will be nudged down to attain tax credit eligibility, growing this market percentage.

The biggest beneficiaries of the used EV tax credit in 2023 may not be those vehicles that most people think of as EVs. Fifty percent of the cars that meet the price requirement for the used tax credit are plug-in hybrids (PHEVs). Used PHEVs overall in the market today have an average price of $18,486. 31% of all used PHEVs are currently priced below $25K, compared to just 7% of fully battery electric EVs.

As a snapshot of the low-priced EV market, here are all the models with mean price at or below $27,500. This threshold is a bit above the tax credit limit of $25,000, since we are building in room for market effects and price negotiation. Also, there are always individual models priced below (and above) the average price.

2017 and Older EVs Are Most Likely to Receive Tax Credits

Last quarter, we focused on the relatively new practice of “car flipping,” or reselling used cars that are less than a year old. The IRA’s used tax credit guidelines stipulate that all eligible used EVs must be at least two model years old, meaning that when they go into effect in 2023, only 2021 and earlier model years will be eligible. In the current market breakdown, 14% of vehicles in used inventories would be excluded by this rule.

In practice though, the 2-year-old model guideline won’t have much of an effect because it’s nearly impossible to find a used EV for under $25K that is less than 2 years old. Here’s the breakdown of tax-credit eligible vehicles (under $25K) by model year:

In addition to having restrictions on the vehicle for tax credit eligibility, there are also requirements for the buyer. The obvious ones include that the car must be purchased for personal, non-commercial use, and that each taxpayer is only eligible once every three years. These requirements, combined with the income cap, help direct this tax credit towards a certain demographic of EV buyer: income-limited shoppers.

All of the requirements combined may make it seem hard to actually use the pre-owned EV credits. And, when the law goes into effect in January, 2023, only people with specific driving habits and charging availability will really benefit. However, within a few years, economy-priced used EVs will flood the market and be eligible for this tax credit. Starting in 2024, the credit should also a point-of-sale rebate, helping income limited shoppers (who may not get the full year-end tax benefit) even more.

While the Inflation Reduction Act is being heralded as a cleantech omnibus that will reinvigorate US investment, research, and development, a second piece of legislation out of California may also have a profound effect on EV adoption. They’re both part of the factors causing EV adoption to accelerate more quickly than industry experts have been predicting.

California already leads the nation in EV sales for both new and used cars. Year to date in 2022, the new vehicle share of EVs in California was 16%, compared to a nationwide average of 6%. And now, it is the first state to officially ban gas-powered cars. Following 2020 Executive Order N-79-20, Governor Gavin Newsom codified the phase-out of new combustion engine cars by 2035, pending an updated waiver from the EPA. Each year, auto makers must meet minimum percentages of new electric vehicles sold, as seen in the chart below from the California Air Resources Board, which administers emissions regulations in the state.

“We should focus less on the 2035 phaseout for now, and more on the early targets. The 2026 threshold of 35% EVs means another more than doubling of a market that is already way ahead of the rest of the country, in the next few years,” said Scott Case, CEO of Recurrent, “When you add on other states to this near-term target, we’re talking about a seismic shift in a very short period of time.”

This new rule is interesting for many reasons, including that it puts the onus for compliance on car manufacturers, not dealers or purchasers. And, the penalties are harsh: $20,000 per vehicle sold that violates it.

The law in California will also trigger similar laws in other states that follow the Air Resource Board’s emissions recommendations. Massachusetts, New York, Oregon, Vermont, Washington and Virginia have already committed or plan to soon (although contested in Virginia). Overall, this single regulation might affect up to 40% of the vehicles in the nation.

Although used cars will not be affected by this rule, California’s law also offers incentives that will directly feed into used EV supply: “California’s new rule gives automakers extra credit toward meeting their sales quotas if they offer new electric models that cost less than $20,275 or sell discounted cars coming off lease.”

In a reversal of policy, the group of Oil Producing and Exporting Countries (OPEC +) decided last week to cut November’s oil production by 2%. This is the first production cut since the beginning of the pandemic slashed demand. This move comes when the US and Europe are already feeling the effects of high oil and gas prices, and is in direct opposition to requests to increase production.

“Russia and OPEC are strengthening the financial case to switch from gasoline to electric vehicles, ultimately accelerating their own irrelevance on the world stage,” said Scott Case.

As gasoline prices remain high, the cost of ownership parity point between gas cars and comparable EVs becomes shorter, without even considering the expected long-term cost reductions in upfront EV cost. The chart below shows the difference in total cost of ownership of used ICE cars vs. used EVs per miles owned. As the price of gas goes up, or as the used tax credit is applicable, the breakeven point between the two gets shorter.

To wrap up, keep in mind that almost every year since 2018, Boston Consulting Group (BCG) has released a thorough market projection for EV adoption. In the few years since the first projection was released, the numbers have continually been revised to increase the rate of adoption.

Recurrent published this chart on US-specific market projections from BCG’s global EV projections. It shows that over the course of four years – from 2018 to 2022 – US EV sales projections for 2030 more than doubled, growing from an estimated 21% to 53%.

Perhaps even more exciting is that this latest report was released in June, ahead of the Inflation Reduction Act, projected gas price increases, and recent state commitments to emission-free vehicles.