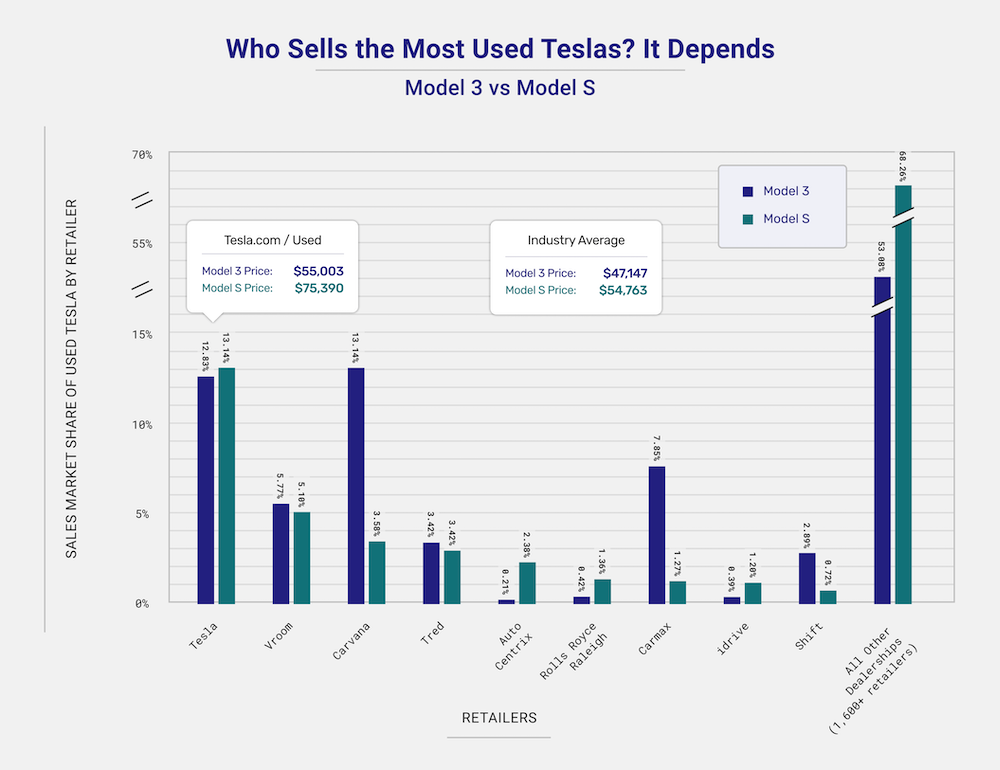 Is Your Used Model 3 Worth More than a New Tesla? Depends Where You Look

Overall, Tesla.com sells more used Teslas than any other single retailer - 12.6% of the market, but looking at used sales data by model, the story is more complicated.

Who Sells the Most Used Teslas?

Tesla.com is by far the biggest player for used Model S sales, representing 13.1% of used sales in the last 90 days. That’s over twice the sales volume of the next highest volume seller, Vroom.

However, Tesla.com does not dominate used sales for the Model 3 in the same way, and in fact is behind Carvana in market share of used Model 3 sales. One key difference is average price: the average used Model 3 price on Tesla.com is $8,000 higher than every other retailer, driven primarily by Tesla’s decision to bundle full-self driving (FSD) capability on every used Model 3 they sell. On specific model years, this average price gap can be as high as $12,000.

While the average Model S price gap between Tesla.com and all other retailers is almost $10,000, this is driven by a relatively small number of premium configuration builds (e.g. ludicrous mode) that makes it difficult to compare apples to apples. When comparing the same model year, the price gap averages anywhere between $1,700 - $12,000, depending on available configurations.

“Since you always have the option to subscribe to FSD or buy it outright, it doesn’t make a lot of sense for this price difference to exist, but clearly some people are willing to pay a premium to buy direct from Tesla,” said Scott Case, Recurrent CEO. “If you don’t want FSD at all, you should definitely look elsewhere for a more affordable used Model 3.”

Why Are Used Teslas So Expensive?

Neither the demand for used Model 3's, nor the price, is going unnoticed. It is now the fastest selling used car of any type, something we reported on this summer, and Elektrek noted on October 14 that some used Model 3 prices surpass the price of similarly configured new ones. There are a few factors at play here. Some of the used Model 3 price inflation is due to the semiconductor shortage, which is driving tons of buyers who typically want new cars to the used market since it's nearly impossible to find desirable new cars in inventory. Another issue is that new Model 3's are no longer eligible for the $7500 federal tax incentive, which basically ensures at least that much depreciation on used sales the minute they drive off the lot. It's also worth nothing that as of the week of October 18, 2021, the delivery date for the least expensive, base model Tesla Model 3 is almost a year out. The wait time drops the more features and expensive options you add on, with the Performance model being ready almost immediately, but the delivery date could certainly push some shoppers to readily available, used options.

Of course, some of the pricing craziness that Elektrek is reporting is still because tesla.com is bundling of FSD with all used Model 3's, which drives up the price by about...$10,000.

The final piece of this puzzle may be the simplest yet: Tesla can get away with Model 3 markups. While the rest of the auto industry is floundering with a 22% decrease in quarterly sales year over year, Tesla has seen an increase of 67% in their figures and 104% if you look back to their 2019 numbers. They seem to be one of the few companies with any flexibility in their semiconductor use and have been able to repurpose chips to continue production, limited though it is.